What is Scaravelli Yoga?
Find a therapist
Find a coach
Join as a practitioner
Log in/register 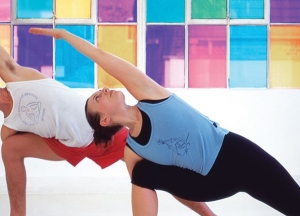 What is Scaravelli Yoga?

Once, during a chronically busy phase of my life, I bought a self-help book called “Do Less, Achieve More". Who could resist the promise of that title? Of course it was rubbish: a doomed attempt to fuse the principles of Taoism with those of free-market capitalism. As with any good pyramid scheme, the only person in this scenario who was achieving more (income) was the book's writer, who did indeed appear to have expended less energy on writing the book than it cost me to read it. On the surface, 'Do less, achieve more' could also be the motto of Scaravelli yoga. But before you dismiss it as an equally false promise, I can assure you that in yoga, 'doing less' takes an awful lot of practice, and it's by no means an easy route to success.

Vanda Scaravelli was born in Italy in 1908, into an artistic and musical family. She didn't come across yoga until she was in her 40s, when the violinist Yehudi Menuhin introduced her to his teacher BKS Iyengar. She also studied pranayama (breath control exercises) with TKV Desikachar, and philosophy and meditation with Jannu Krishnamurthi – a highly distinguished set of teachers. Inspired by them all, but also guided by her own innate sense of the body's rhythms and natural patterns of movement, she developed the style of yoga that now bears her name, and was an active student and practitioner of yoga for more than 50 years.

Scaravelli's key innovation was her focus on working with gravity: surrendering the weight of the body and dropping the bones towards the earth, and using that grounding sensation to help extend the spine up to the heavens. Experienced practitioners appear extremely graceful and fluid to watch, but it takes a lot of patience and persistent practise to truly feel the sense of release and expansion that Scaravelli was looking for. As she said herself, “To absorb the teaching requires infinite time and no ambition".

What happens in a Scaravelli yoga class?

Sometimes, not much! The method encourages you to take your time, and the teacher will often give only a handful of poses in the course of the class. That means lots of time to explore and ease into the experience of the asana (posture). It's a gentle style rather than a sweaty one, but eventually you can reasonably hope to achieve deep backbends and inversions without effort or heave.

Scaravelli was a woman with a poetic turn of phrase, and many of her followers like to use vivid metaphors and visualisations too. So you might be asked to imagine you have a tail, or that your feet are growing roots into the ground. Classes can be very light and playful or deeply stilling and meditative. At its best, this is a form of yoga in which you are encouraged to take responsibility for your own body in a spirit of compassion and intelligent enquiry.

If you find visualisations useful and like the idea of peeling back many subtle layers in your yoga practice, this could be the style for you. Lots of artsy and imaginative types are drawn to Scaravelli yoga, with its emphasis on exploration and play. It's a gentle practice that suits all bodies, and it's popular with people who come to yoga later in life – look at these pictures of 80+ year old Vanda if you're a late starter seeking inspiration.

It's also deeply uncompetitive: with Scaravelli yoga, goal-oriented striving and grunting will actually have a negative effect on your progress. So if your six-day-a-week dynamic yoga habit is making you a tad arrogant and irritable, submitting to a Scaravelli practice will cool your heels for sure. Scaravelli said, “Do not kill the instinct of the body for the glory of the pose." Those of us who are used to 'achieving' yoga postures can find the task of rediscovering that quiet instinct a humbling, but ultimately very rewarding effort.

If you respond well to unambiguous physical instructions, you might feel more comfortable with a rules-based system like Iyengar yoga. Although Scaravelli yoga is based on Iyengar foundations, it's much more interpretive – in other words, it's up to you to decide if you're doing a posture 'right', rather than relying on a teacher to 'correct' your shape. If sweat is your chosen route to enlightenment, this style will probably not feel physical enough for you – but dipping a toe in Scaravelli waters might give you some useful inspiration to take back to your dynamic classes.

What are the benefits of Scaravelli yoga?

This style of yoga is all about freedom: freeing the body, and particularly the spine, to be light and flexible. Yoga works through your body-mind connections, so you'll probably free your mind as well, developing more self-reliance, patience and compassion in your practice. Vanda Scaravelli's example gives us all permission to follow our own yoga path, wearing traditions lightly and becoming our own best teachers. She puts it this way: “Do not look at your body like a stranger, but adopt a friendly approach towards it. Watch it, listen to it, observe its needs, its requests, and even have fun. To be sensitive is to be alive."

Vanda Scaravelli only ever worked with a handful of pupils, and did not wish Scaravelli yoga to become a brand. Teachers describe themselves as 'Scaravelli-inspired', rather than claiming a Scaravelli method. Some leading exponents of the style in the UK include Sophy Hoare, John Stirk (both of whom studied directly with Vanda), and Catherine Annis; others are spread far and wide so enquire at your local yoga centre to see if any teachers are influenced by Scaravelli's approach.

How yin yoga supports my therapy

Yoga and the menopausal woman

How to start an early morning yoga routine without losing sleep