What 'All or Nothing: Arsenal' Teaches Us About Mental Health
Find a therapist
Find a coach
Join as a practitioner
Log in/register 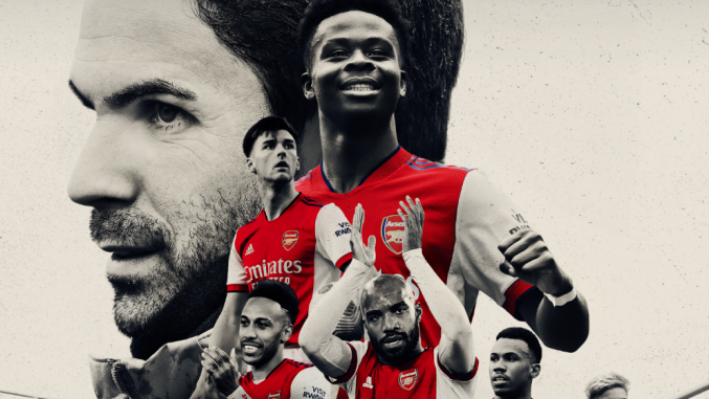 What 'All or Nothing: Arsenal' Teaches Us About Mental Health

Although Arsenal are definitely going to win the Premier League this season (!), the 2021/22 campaign was, unfortunately, not so successful. There were moments of brilliance, important re-connections with the fans, and clear signs of progress, but it ended in excruciating disappointment. It was a season like no other, not least because it was captured on camera by Amazon, for their All or Nothing: Arsenal documentary.

While the series provides only glimpses into life in Arsenal’s football team, those glimpses are fascinating. As well as the physical demands, significant emphasis is given to the emotional and mental challenges the team face throughout the season: Arsenal treat all three aspects as essential to the team’s success. There’s the question of how to handle the immense pressure of competing at the highest level; the difficulties of balancing individual identity and the team; juggling between personal and professional lives; managing disappointments; and coping with the loneliness that comes with moving to a new place (whose language you may not speak), away from friends and family.

Although some of these challenges are unique to professional footballers (fortunately, few of us have to learn to survive a press conference after a crushing defeat!), many are much more relatable. A particularly universal question we see all of the team grapple with is how to build and sustain the resilience required to keep going, despite significant obstacles. So, what can we learn from Arsenal FC about resilience?

The pitfalls of perfectionism

As is the case for all of us, professional footballers make mistakes. Responding well to these mistakes is crucial, because they have the potential to severely impact the footballers’ mental health. In episode 3, we see 22-year-old left-back Nuno Tavares struggling with this. Nuno is a very talented player, but he’s also young, and his inexperience led to costly mistakes in a couple of matches. In one scene, Nuno tells the interviewer, ‘I think about my mistakes, because that’s what stays in my head, not the good things I’ve done on the pitch. I think, in your head, you always think about what you did wrong in the game’.

We can imagine the impact that this sort of thinking could have. It is important to give mistakes airtime: they provide us with important data, which can help us if we use it appropriately. If we do not accept mistakes as a normal - albeit frustrating - part of the process, and do not allow ourselves to let go of them once we’ve reflected, we are in danger of entering a perfectionist mindset. A perfectionist mindset traps us in a cycle of criticising ourselves for falling short of an impossible task. It stops us from being able to move forward, because it diminishes our self-belief to the point that we believe progress is impossible.

As Arsenal’s development coach Carlos Cuesta tells Nuno: "You are going to make mistakes. It’s normal, don’t worry about it. We’ll correct them and they won’t be repeated. Maybe you will make different ones, it’s normal". The message is, nobody is expecting Nuno to be perfect. In order to maintain resilience, we must avoid expecting this of ourselves.

The importance of boundaries

The Swiss midfielder Granit Xhaka is an important – and occasionally divisive – member of the team. During the series, he talks about some of the off-pitch challenges the players face, such as fan criticism. As he says in episode 5, ‘people forget that you are human’. Later that episode, we see Granit at home with his family, where he talks about how important it is to have that space as respite, away from everything else.

While most of us don’t contend with an angry fan-base during our daily lives, boundaries are still crucial for our mental health. We need to be able to switch off from our work, and from the role we play there. Clear delineation between who we are at work and outside of it is essential for resilience, because it underlines to us the fact that we have value, purpose and things that matter to us as individuals, separate to our work. Without that understanding, we are vulnerable to being significantly affected by the ups-and-downs of a job, over which we may have little control. While work can play an important part in providing meaning to our lives, it is essential that we don’t neglect our human side, nor – like some of the people Granit talks about - forget that it exists.

How our support networks help

While the series gives insight into the individuals at Arsenal, we also learn a lot about how they function as a team, and how important this is for resilience. Episode one features the first of many moments in which Mikel Arteta demonstrates his majestic skill with a whiteboard, as he talks to the team after back-to-back defeats at the start of the season have significantly dented morale and incited heavy criticism from the media and fans alike. Arteta tells the team how low he felt after the last defeat, but that he’s been brought up from that lowest point of feeling by his family; the support of the club and its owners; and then the players themselves: ‘thank you so much to all of you, because you made, in a difficult moment, the best week of my football career.’

Individual resilience requires collective support. As Arteta describes in this team-talk, we need to connect to others in order to maintain our own good mental health. This doesn’t mean asking or expecting others to ‘solve our problems for us’, but it does mean letting people in, talking about things we’re struggling with, allowing them to be alongside us during tough times. Nobody – in football, or anywhere else in life – can manage everything alone: as Arsenal show us, we all need to be part of a team.

Although you may not be a Premier League footballer, perhaps there are aspects of your own life that correlate with that of the Arsenal team: maybe you too have a high-pressured, very competitive job, or struggle to maintain a good work/life balance. What Arsenal: All or Nothing underlines is how fundamental solid resilience skills are to keeping us healthy through even the most challenging circumstances, and that we must prioritise training those muscles too. Or, as Arteta puts it in his iconic whiteboard illustration: to keep them both smiling, your heart and brain must be holding hands, together.

How sport can change women's lives

The psychology of pressure in high performance sport

Running helps me manage anxiety: could it help you too?