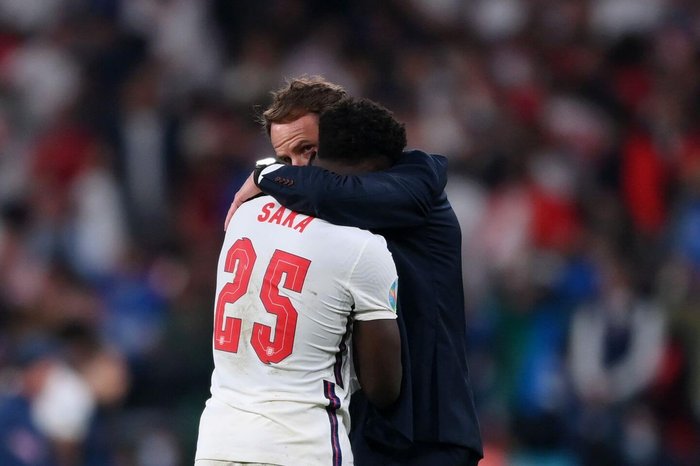 The Psychology of Pressure in High Performance Sport

Imagine you are a19-year-old elite footballer, standing on the pitch of England’s Wembley Stadium in front of 60,000 plus people. You know that most cheering fans, and millions of people watching around the world on TV, are waiting for you to score the final goal in this nail-biting penalty shootout. No task for the faint hearted.

As two of your teammates have already failed to score, you know that the outcome of this match now rests fairly and squarely on your teenage shoulders. No pressure then! You step forward, looking at the goal ahead of you, with the huge presence of the Italian goalkeeper seemingly taking up most of the goal space. As you stand there, what is going through your mind?

Experts talk about mental toughness in sport. This sounds more like athletes forcing themselves to be tough in the face of competition; but it is almost the opposite. The more relaxed you are the easier it becomes … So what could have gone wrong with these three talented footballers at the Wembley cup final?

Regarding Marcus Rashford and Jadon Sancho, I believe Southgate made a fundamental mistake in sending them onto the pitch with less than two minutes to the end of the match. They had been denied the crucial mental feeling of being 'in the game' unlike the other players, most of whom had played the full 90 minutes. While they may have warmed up physically, they came onto the pitch 'mentally cold'.

For Saka, a kid who was picked up by Arsenal at the age of seven, he was the youngest and possibly the least experienced at this level of competition. He had already seen his two teammates miss their penalties, which would have had a negative effect on him, followed by the overwhelming feeling that the victory for England was now all down to him. The teenager should not have been left to shoot last, if at all, and it is debatable if he had learned the essential skill of clearing his mind for such a big occasion and at that precise moment. Of course, luck and guesswork are involved to a degree against an acclaimed Italian goalkeeper, but a clear mind and the ability to shut out everything else around taking a penalty, would always be key in making the best decisions.

Small children learn by repetition, for example, when learning to walk, a toddler will pull himself onto his feet, and may fall down 200 times before mastering the art of walking. Once he can walk, it becomes a ‘programme’ (like in a computer) in the unconscious mind and from then on, the child can get up and walk without thinking, “Can I do it? At school we learn that 2 + 2 = 4 and that an elephant is a huge grey animal with a trunk. Once in the massive unconscious mind hard drive, like the elephant, we do not forget.

What enables us to learn easier and faster? The more attention we give something, the quicker we learn it, and when we are passionate, the learning process is accelerated. Top- level athletes tend to be extremely focused, loving what they do; but not everyone can hold undivided attention for prolonged periods. Many sports demand supreme concentration: a boxer may need it for more than 30 minutes to cover 10 three-minute rounds, and the consequences of not paying attention could result in potentially serious injury.

A racing driver must learn to concentrate for perhaps upwards of 30 minutes in a race while competing at high speed; failure to maintain this level may cause a crash. The longer competitors can maintain extended attention to this degree determines the level to which they will succeed. Nothing focuses the mind better than self-preservation.

Tennis is a sport where players can visibly dip in and out of attention, but it is an intensely psychological game which can last for three or four hours. World number one, Serbian Novak Djokovic, is a true mind master. He uses every tool to his advantage, diet, exercise, relaxation, yoga, etc; everything he does is one-directional in the pursuit of winning.

Mind mastery involves learning to use thought as a tool. Thoughts should be the building blocks of where you want to go, what you want to do, and how you want to do it. The ability to switch off negative thoughts and focus on what you do want to happen is essential. Allowing intrusive thoughts to come in while racing a car at 100 mph may not end well!

Relaxation training helps with mind control in clearing the mind. Top athletes function automatically ‘in the flow’ without having to think about what they are doing. Mihaly Csikszentmihalyi (pronounced cheeks-sent-me-hi), one of the founders of Positive Psychology, during 30 years’ research, discovered that ‘being present’, ‘being in the now’, and indeed happiness and peak performance, were the measurable elements of a person in the flow state.

Clarity of mind will never come from a cluttered, anxious mind. Athletes train to function under pressure, using years of repetition to imprint their movements into the unconscious mind, thereby enabling them to perform automatically in competition.

How sport can change women's lives

3 steps to confidence in public speaking

Banish your inner critic and build your confidence