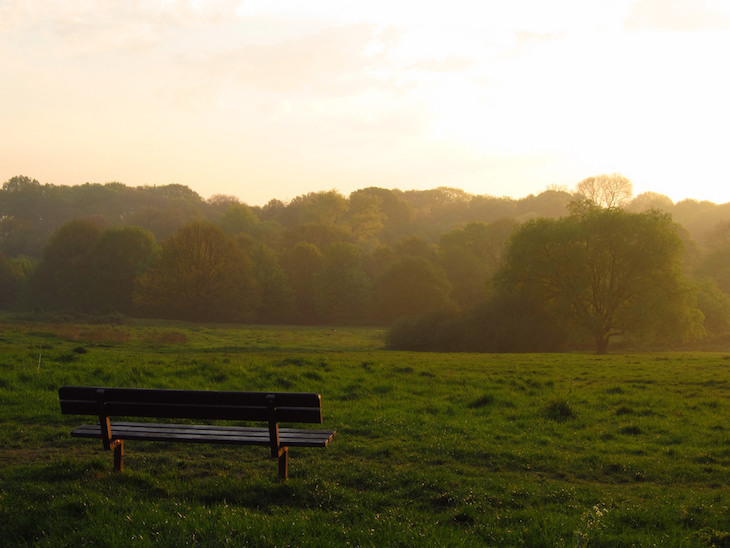 All fields we’ll turn to sports grounds, lit at night From concrete standards with fluorescent light. And all over the land, instead of trees Clean poles and wires will whisper in the breeze. Planter’s Vision (1970), John Betjeman

It is not a coincidence that the most popular cities in the world have a lot of green space. London has more parks than any other city, and they are incredibly popular. Like many successful parks around the world, their landscapes have smooth ground cover, scattered trees, some openness and depth, and water features. They also have parts that are wild, or obscured, and land that rises up and falls away. Although Hyde Park, with its 3,000 trees and Serpentine lake is most visited, it is arguably the wildest parks that are most invigorating and restorative. Hampstead Heath has fields to run in, long grass to roll in, woods to hide in and, most famously, ponds to swim in. C.S. Lewis lived near Hampstead Heath. Its rises, ponds and woodland glades are thought to have inspired his vision of Narnia.

Hordes flock to the refreshing waters of the Heath’s celebrated ponds in the summer months, and in the colder months it’s more rewarding to while away an afternoon feeding the ducks or exploring the lush woodland, bogs, hedgerows and grassland. London’s councils make sure that the parks host events year-round: sports events, open-air theatre, food festivals, art fairs and live music concerts that give them a sense of place. Their differing forms encourage different activities. The flatness of Clapham Common makes it popular for team sports and jogging. Over just a few years the Common has developed its own unofficial running track.

Agnes van den Berg, professor of Experiencing and Valuing Nature and Landscape at the University of Groningen in Holland, has conducted a series of experiments examining how green space near to where we live can reduce the impact of stress – through a buffering effect. As she observes, we often seek out nature in times of stress. For example, US national parks observed a pronounced increase in the number of visits following the attacks on the World Trade Center, New York in 2001. Park managers noted that people were not just wandering aimlessly but were using the space and time to reflect on what had happened.

Public parks can support physical activity and facilitate social cohesion. However, according to Professor van den Berg, green spaces appear to have a special quality that is lacking in other public areas: national surveys in several countries have consistently shown that being in nature is one of the most powerful ways for people to obtain relief from stress.

A study in Helsinki, Finland, found that even short visits to an urban park or an urban woodland led to marked stress-relieving effects in city dwellers (when compared with a visit to the city centre). They also found reduced levels of the stress hormone cortisol in their saliva – disrupted patterns of cortisol secretion over the course of a day are associated with poor mental and physical health. Cortisol has been shown to be sensitive to activities in natural environments in many studies.

For example, if you take male university students to forest and city environments, away from their usual work or home contexts, their cortisol levels will drop. When people who engaged in gardening as a hobby in their local allotments were asked to spend time either gardening or reading indoors, the former reduced their cortisol more than the latter.

Research has seldom attempted to detect a biological impact of exposure to green and natural environments encountered as part of ‘everyday life’, especially for deprived urban populations, who are generally exposed to more stress. A study in Dundee, Scotland examined changes in cortisol throughout the day in people who were not working, for whatever reason (unemployed, on incapacity benefit, caring for a family member and so on). It found that the greater the amount of time for which people were exposed to green areas in a day, the lower was their cortisol as the day went on. Those who did not have much exposure to greenery but did plenty of exercise also had reduced cortisol levels, demonstrating that exercise helps compensate for a lack of green space in combating stress.

In this study, the amounts of green space were not copious. In general, the scientific evidence suggests that we do not need to have wilderness on our doorsteps to feel the benefit of contact with other living things. Although seascapes and other wild open spaces are optimal, we can still feel restoration in the bits of green that a city can offer, if care is taken to expose ourselves to it. We can also ensure that more trees are planted, that we plant more shrubs and green verges along our roads.

Professor van den Berg points out that our instinctive attraction to nature is expressed in how effortlessly our attention is held by natural scenes – what Rachel Kaplan called a ‘soft fascination’. When nature captures people’s attention, pessimistic thoughts are blocked, and negative emotions are replaced by positive ones. Beyond this immediate effect, spending a longer time in natural landscapes gives us space to contemplate bigger life questions, make sense of where we are and what direction our life should take next. This is the goal of the Native American tradition of the Vision Quest – a solitary journey into the wilderness for several days, where the wanderer communes with nature and reassesses priorities, goals and their own place in the larger scheme of things. These rituals often occur at major transitions in life, including coming-of-age.

However, the power of nature to inspire change does not appear to be true of all landscapes. Idit Shalev of Ben-Gurion University in Israel explored the effect of pictures, both real and imagined, of arid landscapes. From an evolutionary point of view, deserts are less favourable to wellbeing and survival. In this study, viewing pictorial images or visualising mental images of a desert (versus a landscape with water or a control) felt more stressful and ‘depleting’. In other words, desert images reduced feelings of vitality. In turn this reduced participants’ confidence in their ability to change negative habits and addictions, like smoking.

Interestingly, viewing a desert was still better for feelings of vitality than viewing an urban scene, devoid of any nature. The scene with water increased motivation for change at the same time as increasing subjective vitality.

In general, research has shown that positive emotional and cognitive effects can be obtained from nearby green space such as gardens as well as more remote settings. Even looking through a window can be helpful. Office workers in southern Europe were less likely to experience work stress and quit their jobs if they had a view of nature.

Green space may not only affect stress and mental fatigue directly in the moment, but may, over time, build up some immunity to the impact of a stressful life event, such as a bereavement or a major health crisis like being diagnosed with cancer. Research in Sweden has shown that daily exposure to nature improves mental health and attention in response to such personal crises. So, adult play in green spaces makes us happier, aids contemplation, helps us deal with major negative life events, and buffers against stress, while encouraging social contact. Merely being exposed to views of nature might be enough to keep us free of mental distress a lot of the time, but travelling to larger, wilder spaces will be more helpful at times of severe stress. When travelling out of the city limits is not possible, being next to a park is a priority. The more parks that we can create from the disused parts of our cities, the less stressed we all will be.