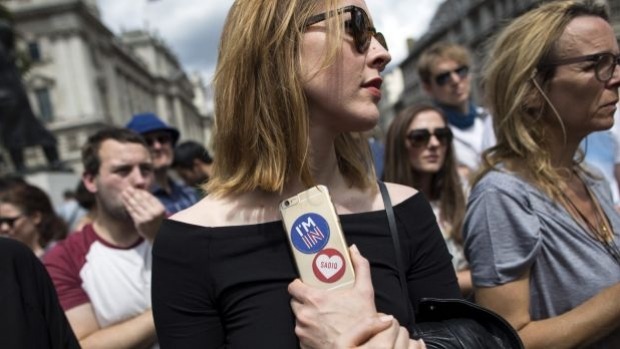 The 5 Stages of Brexit Grief

In the past six weeks or so since the UK voted to Brexit I’ve witnessed some pretty intense emotions in my consulting room. From the first clients who came for sessions on June 24, mere hours after the Brexit decision was made, to now, the topic of our seceding from Europe and what it symbolises has never been far away. I should state up front that my consulting room is in West London and the majority of my clients voted to ‘Remain’.

The Brexit emotional fallout seems to me like a kind of grief, an intense feeling of loss for something indefinable, yet uniquely personal. It struck me that the stages I’ve seen the people around me – my clients as well as friends and colleagues – move though this past month seem to map quite accurately onto those outlined by Elisabeth Kübler-Ross in her seminal 1969 book On Death and Dying.

While the process of grieving is neither linear nor homogeneous, Kubler-Ross’s model is a very sound one for explaining the way in which we handle grief and loss.

The first stage of grief in the Kübler-Ross model is ‘denial’. While we’re in this state, we wish to block out what’s causing us pain – in this case, for 'Remainers’, the fact that the majority of Britons voted to exit the European Union. I witnessed this sense of denial first-hand in my consulting room the day after the referendum – repeated utterances of ‘I can’t believe it. I just can’t believe it’. As a collective, this was manifested in the many petitions circulated via social media – whether it was to make London a separate state or to hold a second referendum - the common theme was one of rebuttal of the fact that 52% of the UK population had voted to leave the EU and that Brexit was indeed what was to transpire.

As denial started to wear thin, the reality of what the Remainers were desperately trying to push away started to seep in. In response to this, anger started to bubble up. This is where the blame game began – anger was vented at anyone perceived as being pro-Brexit - relatives, friends, neighbours, the elderly, and politicians. My clients recounted countless stories of rifts with parents, siblings and colleagues who had voted for Brexit.

The third stage of grief is ‘bargaining’. In the traditional model of grieving over a loved one that has died – this would be the point where we start beating ourselves up about whether we should have sought a second medical opinion or tried a new treatment perhaps. It’s a very human desire to wish to gain control over a disturbing situation and this stage is symptomatic of that. In the weeks after the Brexit vote, many clients expressed regret in not discussing the topic more before the referendum, for failing to ‘do their bit’ to try and convince undecided friends or family. More broadly, we saw people scrabbling for ways to prevent the ‘Brexit divorce papers’ aka Article 50 being pushed through.

After the denial, anger and bargaining have expired, there is finally sadness. The pain is inevitable – in fact the other emotions can be seen as defence against the pain. Amongst my clients – what exactly they were mourning for varied widely. For one, it was her view of the community and society she lived in, which hitherto she had assumed was tolerant, liberal and open to foreigners. For her, Brexit marked the end of this idealised view of her land. Another client mourned the fact that her kids would probably never experience the ease and freedom with which she had lived and worked in several European capitals. Another client, whose parents moved to the UK just before she was born, felt for the first time that she was an outsider in her country of birth.

The final step in the grieving process is ‘acceptance’. Many never reach this stage as they get stuck in their anger or their denial and simply cannot move on. However, I’m starting to see some budding shoots of acceptance amongst my clients. Acceptance doesn’t mean giving up but it does involve the realisation that bashing your head against a wall, wishing that we could go back to the glory days of pre-June 23 is futile. One of my clients, in particular, springs to mind - in the first couple of sessions following the referendum, she vented her anger, her frustration, her searing disappointment about the result. More recently, she has now come to realise that there is nothing she can do about this particular decision her country has made democratically. Instead, she has moved on. What has helped her cope with the intense emotions triggered by Brexit is to harness that energy and invest it by becoming politically engaged. She has recently signed up to a political party, a move she never even considered pre-Brexit.

And if there is one thing we can gain from all of the dismay and division, and, indeed, grief experienced by almost half our country, it’s this – acceptance. In these post-Brexit times, grief’s hard won lesson of acceptance is acutely needed - acceptance of that which we cannot change and acceptance that other people hold different opinions to our own. If Remainers really wish to ‘teach’ the 52% something about tolerance, they would do well to lead by example. Show them that it’s possible to live alongside and even love people whose beliefs differ from their own.