Meditation: My journey begins
Find a therapist
Find a coach
Join as a practitioner
Log in/register 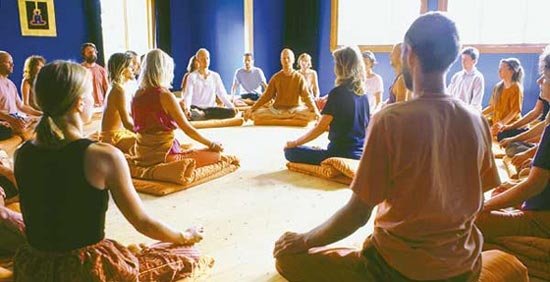 I have never had much time in my life for peace or quiet, and have never really craved either.

My mind is a happy hive of perpetual activity, everything churning away up there all the time, day and night. My wife points out, with reason, that I never sit still, never stop. At night, I dream of work, and on holidays, thanks to technology, I take it with me. In sleep, I grind my teeth. The RSI I developed 20 years ago was put down to overwork, poor posture, bad habits, a lack of inner calm. My solution was to start swimming, every day. I swam fast, faster than people in the other lanes.

A few months ago, my wife and I were discussing our children, how one of them, the older one, cannot sit still, is constantly flitting from one thing to the other, like a Mexican jumping bean. "Look at her," I lamented, shaking my head.

Having seen or read something on meditation recently, I suggested, now, that my daughter try it. I showed her how to breathe in slowly, then breathe out slowly, and relax. Prana, I think this is called.

My daughter appraised me coolly.

If meditation has never been on my personal radar before, then it has long been on my periphery. I grew up regarding it with an arch cynicism. My mother was an avid practitioner, not only of meditation but yoga too, at a time (the 1970s) and place (a south-east London council estate) when either was viewed with suspicion, and both with hearty ridicule. In later life, she gave over much of her time to the slow motion practice of Tai Chi, sometimes putting in as many as eight hours a day. She would often encourage me to accompany her to classes, insistent it would be good for me. I scoffed, and changed the subject.

I clearly wasn't ready for it then. I am perhaps now. Meditation is a buzzword these days; the broadsheets are practically aflame with talk of it. And so a discipline that has been around for centuries now is suddenly to self-help what Hoxton is to London. Consequently, I found myself increasingly intrigued by it, and aware that inner calm might do me no harm.

Listening to someone who sounds like a Dalek for 20 minutes does precious little for the promotion of peace.

But to ease myself into this uncomfortably quiet world would require a certain effort, and explanation. And so I speak to Dr Danny Penman, co-author of Mindfulness: Finding Peace in a Frantic World, a book that has quietly sold over 200,000 copies around the world since its publication three years ago, and continues to shift 2000 copies a week in the UK alone.

"Stress hampers healing, and also hampers the immune system," he tells me. "But if you remove a lot of the daily stresses you carry, which is what meditation does, then your body will speed up the process of healing, and revert back to its normal, optimal state. It is stress that retards that process."

He tells me that meditation, at its core, is about self acceptance, "not in a fluffy, self-indulgent, wallowing way, but just in accepting that you are human, you suffer like everybody else. Sometimes life is good, and sometimes life is bad. That's just the way things are, and acceptance of the situation you are in is hugely important."

Dr Penman describes the practice in a down-to-earth, graspable-for-sceptics fashion, and bursts for me several preconceived bubbles. No, he says, meditation doesn't have to be painful (I had read of certain meditations which require kneeling on a concrete floor for hours on end), and that one doesn't even have to do it cross-legged, on the floor; a comfortable chair is fine. Also, it is very difficult to do meditation "wrong".

"You simply have to approach it in the right spirit," he says. "And if the mind is constantly hopping around while you do it, then don't worry, that's what minds do."

This is good to know.

I am reluctant, at first, to move far from my desk in my research, and so I spend my first few weeks of investigation sat here, at home, in front of my PC, browsing the countless guided meditations on Spotify, and downloading others from iTunes. While an expert requires only an extended period of silence, the beginner does need a guide. But the quality of guides veers wildly. Not everyone, I quickly learn, has a voice for meditation. Some are stilted and awkward, others downright bizarre, feeding their voices through some kind of vocoder for otherworldly effect. But why? Listening to someone who sounds like a Dalek for 20 minutes does precious little for the promotion of peace.

But I also encounter some unexpectedly wonderful, soothing voices, and practitioners whose methods I want to revisit, and learn more about. And so, slowly but surely, I find I get into it, and get something out of it, too, much more than I’d ever have expected. Perhaps I am my mother's son, after all?

It is still early days, and I am still taking baby steps, still concerned, despite Dr Penman's assurance, that I might be doing it wrong. Which is why I want to investigate it all further now, and properly, not just alone, in my room, but out there in the world, alongside other people, where the collective silence, I'm told, speaks louder. I am eager to start, to be a guinea pig, and to share my experiences, here, over the next few weeks and months.

All of which, I suppose, means I’ve developed something I never thought I would have for meditation: an appetite.

Click here to buy Mindfulness: A practical guide to finding peace in a frantic world