What is Kundalini yoga?
Find a therapist
Find a coach
Join as a practitioner
Log in/register 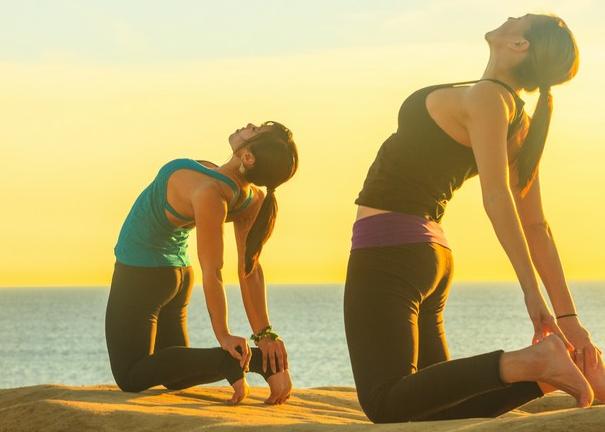 What is Kundalini yoga?

In the farthest departure lounge of yoga (next stop, Nirvana), white-robed initiates pursue altered states of consciousness, chanting and panting as they wait for a mystical serpent to rise up through their spines. Kundalini yoga is as far from the tight-buns yoga-cise trends of East London as the Himalayas are from Hackney.

Kundalini shakti is the name given in esoteric Hinduism to a potent energetic force that believers claim lies coiled at the base of the spine, like a snake – which is why it’s sometimes called the ‘serpent power’. Kundalini yogis believe that the performance of certain kriya (sets of exercises thought to cleanse the body), pranayama (breathing techniques) and mantra (chanting) serve to awaken the ‘serpent power’, drawing it up through the spine to the higher energy centres in the head. This raises the individual to an altered state of consciousness where his or her individual awareness merges with the universal cosmic consciousness. The purpose of this, according to Swami Sivananda’s foundational 1935 text Kundalini Yoga, is "to cultivate the creative spiritual potential of a human to uphold values, speak truth, and focus on the compassion and consciousness needed to serve and heal others."

The raising of kundalini energy through the chakra centres along the spine is in part a metaphor for the transformation of sexual energy.

Salacious whispers often arise around Kundalini because of its connections with tantra – the esoteric teachings that most of us only hear about in the context of “tantric sex”. It’s important to point out that Kundalini yoga is not a tantric sex cult! But it’s also a not-particularly-well-guarded secret that Kundalini yoga can make you feel sexy. The raising of kundalini energy through the chakra centres along the spine is in part a metaphor for the transformation of sexual energy (traditionally resident in the lower chakras) into spiritual energy (upper chakras). But some of that energy has a tendency to, shall we say, leak out along the way.

The practice was brought to the West in 1969 by a Sikh named Harbhajan Singh Puri (later Yogi Bhajan), who found a ready audience in the heart of California’s hippie counterculture. He offered a legal high without drugs, and a safe alternative to addiction for many. On the side, he and his followers built up a business empire worth hundreds of millions of dollars, including the Yogi Teas company and one of the largest private security firms in the US. The organisation he founded – 3HO – has been criticised as a cult by experts including Rick Ross, Prof Richard Ofshe and Steven Hassan.

What happens in class?

Kundalini yoga classes feel quite different from mainstream styles of hatha yoga. Most of the class takes place seated or kneeling on the floor, and chanting and breathing practices are at least as important as physical movement. Teachers often adopt a Sikh ‘spiritual name’ along with a traditional turban, and usually dress entirely in white (to enhance spiritual vibrations); some may ask their students to wear white too.

Physical movements are designed to flex and twist the spine, as the goal of Kundalini yoga is to free up energies thought to move through the spinal column. Breathing practices include nadi sodhana (breathing through alternate nostrils), and kapalabhati (bellows breath) and agni-prasana (breath of fire), both techniques employing forceful exhalation to ‘pump’ the diaphragm up and down. Mantra meditation involves chanting – out loud or internally – special phrases in Gurmukhi, the sacred language of Sikhism. These mantras serve to focus the mind, and together with the movements and breathing of Kundalini yoga can lead you into a blissed-out, ‘natural high’ state.

All forms of yoga have the potential to create that ‘natural high’, and many students go to yoga classes looking for a particular altered state that, for them, is a by-product of the practice. It might be the floaty, light-headed feeling after a Bikram class, or the deep, grounded calm you get from hours of restorative yoga. But Kundalini is the only form that’s completely up-front about it: you go to a Kundalini class specifically to get ‘high’. So it attracts open-minded people who are interested in knocking on the doors of perception. If you’re visualising Ibiza burn-outs and henna’d Wiccans, you’re only part way there. Lots of outwardly conventional individuals are currently enjoying a richly rewarding Kundalini journey on a cushion near you.

If you have a low tolerance for cult-like trappings – white robes, mantra chanting, spiritual names – or an aversion to numerology, astrology or chakras, then this is not the yoga for you.

Some aspects of Kundalini practice are controversial, not just among more orthodox Sikhs, many of whom regard Yogi Bhajan as a heretic, but also from a Western medical point of view.

On a purely physiological level, it’s important to note that breathing practices that over-emphasize exhalation can bring about hyperventilation – a state in which the blood carbon-dioxide level is reduced, leading to light-headedness, perceptual changes, dizziness and headaches, with nausea and even loss of consciousness in extreme cases. Kundalini teachers say that if you perform the breathing exercises correctly, with expert instruction, you will stay on the right side of hyperventilation, with no ill effects - but take care. Asthma sufferers, and people prone to anxiety or panic attacks, should avoid these rapid breathing exercises altogether.

If you have a low tolerance for cult-like trappings – white robes, mantra chanting, spiritual names – or an aversion to numerology, astrology or chakras, then this is not the yoga for you. In terms of physical benefits, it has less effect on the larger muscles of the body than more athletic forms, though it does help to tone the core and increase flexibility in the spine.

Kundalini yoga is designed to prepare the mind and body for an energetic experience known as  ‘Kundalini awakening’. The phenomenon is real, though rare. Psychologists Stanislav and Christina Grof coined the term ‘spiritual emergency’ to describe it, but its symptoms often point to a diagnosis of psychosis in mainstream psychiatry.  Even those who believe it’s a religious experience agree that it has deeply unpleasant aspects, particularly if the recipient of the awakening is insufficiently prepared. The most infamous account of a Kundalini awakening and subsequent breakdown is in Gopi Krishna’s autobiography “Kundalini: The Evolutionary Energy in Man” (1967). In it, he describes his swing from “a state of exaltation and happiness impossible to describe” to “a condition of horror…suspended by a thread…between sanity and insanity”. This phenomenon is wildly unlikely to affect students during regular Kundalini yoga classes. But it’s important to be aware of the extremes to which the human psyche is capable of pushing itself, with encouragement from certain yoga practices.

What will it do for me?

Kundalini can be a much more extroverted experience than many yoga classes: chanting and breathing in unison feels different from asana classes where you’re encouraged to go within, paying no attention to other students. Consequently it’s a more social form of yoga, with the emotional benefits that being part of a like-minded group entails.

The underlying meditation and concentration practices of Kundalini are shared with other styles and have the same reported benefits: increased feelings of calm and benevolence, better emotional balance, better sleep.

In addition, many practitioners report increased sexual energy and improved love lives as a result of the practice.

You can search for UK teachers near you on the Kundalini Yoga Teachers Association website. In London, the Sadhaka Yoga Centre in Camden (formerly Alchemy) has daily Kundalini classes.

Click to buy Yoga for Real Life: The Kundalini Method

Click to buy Stormy Search for the Self, The: A Guide to Personal Growth Through Transformational Crisis