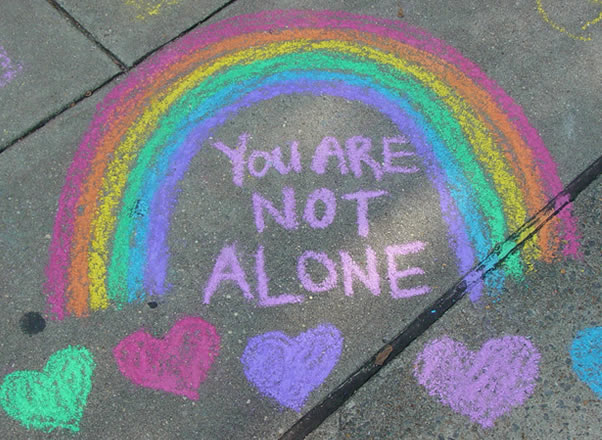 In mid-October I remember seeing my Twitter timeline awash with the hashtag #nationalcomingoutday2017.  Faces appear, some look nervous, some excited - all are accompanied by short snappy statements declaring an LGBT identity. It’s a pleasure to see, so many visible LGBT people in one place. This day is important and means a lot to so many people. It’s a chance to be seen, really seen by others. It offers a feeling of connection to others - to not feel alone but rather part of something.  Self-esteem is boosted through affirmation from others and confidence grows as a result.  Such connections act as a haven in a world that can often feel unwelcoming of those who are LGBT+ *.

People are social beings and we know the benefits of community. We also know that people do not fare too well when faced with prolonged isolation from others. Indeed, like many minority groups, it has always been important for LGBT people to connect with others in order to survive. In a time before ‘the LGBT community’ and social media, LGBT people would use codes - both verbal and physical - to recognise one another. Today, examples of this can be seen in signage such as rainbow flags and political badges. Yet we know that for so many people around the world visibility is highly dangerous. Being LGBT is currently illegal in 74 countries and punishable by death in some of those.

At present, there is a reported rise in persecution of those perceived as gay in Chechnya, alongside a recorded rise in anti-LGBT sentiment in several countries including Indonesia and Egypt. In September 2017 a group raised a rainbow flag at a concert. What has followed has been a crackdown on LGBT rights in the country. Homes have been raided and those perceived to be gay arrested. This is ongoing and escalating. There is a literal silencing of LGBT people, denied not only a voice but the right to physically exist in safety. Indeed, the United Nations LGBT rights expert has warned of a global crisis around LGBT safety and called for immediate global action to halt this. Despite the terror that some LGBT people are living with each day, or perhaps because of it, people continue to use codes to connect with others who are LGBT.  Indeed, Pride festivals take place in hostile environments despite the consequences.  Such is the importance of community in fighting isolation.

In western society, ‘coming out’ is often seen as inevitable when someone is LGBT. Yet not everyone can come out, and this can be for a number of reasons. We can be guilty of assuming someone’s life would be better if they just ‘came out’. However, as noted above being visible can put someone’s life in grave danger. We may feel in our own work that ‘it’s different here’, but how helpful is that for our clients with a history or expectation of being unsafe? I recall when I first met Saira**. She appeared anxious and gave little away about herself. After several weeks, it emerged that she was lesbian and had been granted asylum in the UK. She had been deeply traumatised, not only through violence from her family upon finding out about her (homo) sexuality, but via the process of attempting to gain safety in the UK. Saira noted she had spent so much of her life not talking about and attempting to hide her sexuality, she did not feel she could tell the immigration officers she was LGBT. This affected her case. She wished officers had understood how hard it was for her to ‘come out’ to strangers, given her experiences.

Sami is from Sudan, one of several places it is punishable by death be gay. Sami came to the UK seeking a better life and saw study as an escape route. Yet Sami cannot tell anyone he is gay for fear of it getting back to his family. Nina, a married British Asian woman tells me of her secret dates with a woman. She is highly anxious as her lover is threatening to ‘out’ her if she doesn’t come out. Mark can relate to living in fear, he feared for his life when his father found out he was attracted to other boys - like far too many LGBT youth he ended up on the streets.

There are clients who approach counselling asking for support to reconcile the conflict they feel around their identity and culture. Many of these clients come to therapy noting a questioning of their gender and/or sexuality. However, as the session proceeds it often becomes clear there is no confusion; rather a fear of the consequences of coming out, or being exposed as LGBT. Leading a double life is psychologically hurtful, yet for so many of our LGBT clients this is a reality. For clients who are unable to be ‘out’, feeling part of a community can prevent them from falling into despair.

Yet for so many this is not an option. Clients may fear being ‘outed’ by others who do not understand or appreciate their position. While the LGBT community can be a great haven for some, it is not a safe space for all. Indeed, the LGBT community is rife with issues such as racism. As such those coming out are not necessarily coming out to a place of safety and acceptance. It’s importance to recognise the impact on our clients who experience intersecting oppressions. Artist MNEK highlights the challenge of being an LGBT person of colour, noting ’you’re dealing with being a dual-minority in a world where being one kinda minority is bad enough’ (MNEK 2017). Mari Ramsawakh shares with us the challenges of self-acceptance and coming out in a culture where Mari felt they had to ‘separate my queerness from my brownness’ (Ramsawakh, 2017).

Organisations such as UK Black Pride can therefore be a life-line. Indeed, an increasing number of specific groups are emerging that recognise the need for spaces that welcome the whole of a person’s identity. Such organisations recognise the need for LGBT people of colour to have a safe space, something that is not often found in mainstream LGBT spaces. These spaces can be invaluable for helping clients build positive identities and communities. It’s important to remember though that for some people who feel unable to come out, the promise of confidentiality at these groups fails to override the fear of exposure. For some, the confidentiality of the counselling room may be the only place someone gets to be themselves in the world.

Annie, like many trans women I’ve met, is terrified to come out to her wife. She fears losing her and the kids. Annie comes to see me each week, telling me the sessions are her ‘lifeline’, the only place she gets to be the real her. Annie is one of many clients I’ve met who have talked about their ‘secret life’. Clients who have long known they were trans, have spent numerous years expressing their selves in private and dreaming of presenting their gender identity socially.

One of the leading factors contributing to LGBT advancement in society is greater positive representation.  When I was growing up LGBT, I knew of no-one ‘like me’. Those that I became aware of bore stigmatised identities. When perceived as gay, I experienced the hurt of bullying. Like many, I grew up with a shamed identity. I internalised that I was not okay. This affected my self-esteem, confidence and ability to form healthy connections with others massively. I’ve met numerous clients struggling with feelings of self-loathing, depression and social anxiety which may be traced back to such origins. It is important to recognise that a client’s internalised shame can make it incredibly hard to come out and/or enjoy a positive LGBT+ identity.

Today’s young people are growing up with much greater visibility, better legislation and more support spaces. However, despite a recent Stonewall study (2017) which found that Homophobic, Biphobia and Transphobia (HBT) bullying has reduced in schools, it is still a common experience for too many LGBT youth. Almost half of LGBT youth will still experience bullying in schools (Stonewall 2017). In addition, according to the Albert Kennedy Trust (who take 2000 calls a year) 1 in 4 young people who are homeless likely identity as LGB or T. In turn these young people are vulnerable to grooming and child sexual exploitation (Albert Kennedy Trust 2015).

It’s important therefore to keep in mind on national coming out day - and the days thereafter - that not everyone can come out. In addition, just because someone is ‘out’ in one setting does not mean they are out in all. Although coming out is often presented as a single occurrence it is a repeated process. One will come out over and over again in a lifetime, assessing each occasion for risk: ‘am I safe here? Will I be rejected?’ Indeed, many people go in and out of ‘the closet’ throughout their lives. This is why creating spaces where we don’t assume everyone is heterosexual and/or cisgender (not transgender) is so important. Challenging negative images of LGBT people and promoting diversity around gender and sexuality so vital.

We must recognise not only the impact of collective struggles but also how a client’s individual circumstances impact on their life. This involves a consideration of social power and how it plays out. And for those clients unable to be themselves openly in the world, perhaps we can offer something needed –empathy, acceptance and a safe place to be themselves.

**All names and details have been changed to preserve anonymity

Why LGBT Spaces Can Be Uncomfortable for Queer People of Colour

School Report, The Experiences of lesbian, gay, bi and trans young people in Britain’s schools in 2017