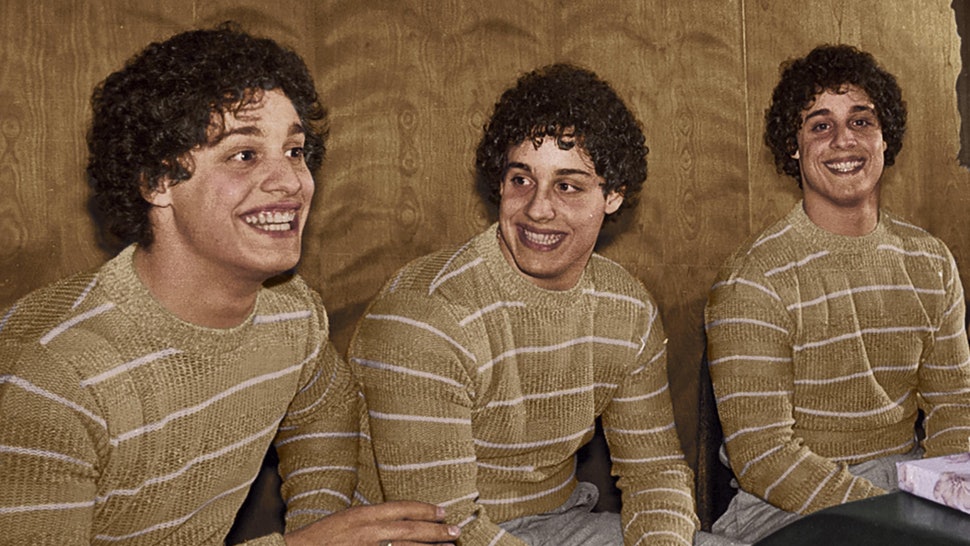 Three Identical Strangers and the History of Twin Studies in Science

As a mum of identical triplets, the idea of twins or triplets being separated at birth makes me cringe. I can't conceive of a world in which my daughters, now 32, would have missed out on each other's company as children. Yep, I had my hands full, as everyone was keen to remind me, but the bond between my girls has always been a source of strength and comfort to them. They are each other's best friends and they keep each other grounded.

Tim Wardle's award-winning 2018 documentary film Three Identical Strangers, recently shown on Channel 4, tells the story of triplets Edward Galland, David Kellman and Robert Shafran, born in New York in July 1961, who were separated at six months old and placed into three different adoptive families. They found each other by chance 18 years later when, on his first day at community college, Bobby was puzzled when everyone greeted him affectionately as "Eddy", mistaking him for his identical brother who had been there the previous year. The ecstatic "twins reunited" newspaper headlines reached the third triplet, David, and as "triplets reunited" they became a national sensation.

They revelled in each other's company, "rolling around like puppies" on first meeting and played to the ensuing media circus, which focused on their similarities: apart from looking the same and having the same mannerisms, every TV appearance mentioned that they'd all been wrestlers while at school and that they smoked the same brand of cigarettes.

The boys exploited the novelty of their identical triplet status, occasionally pretending to be each other: Eddy even got his appendix removed under Bobby's name because he didn't have any medical insurance. They cameoed in Madonna's 1985 film Desperately Seeking Susan. They ran a New York restaurant together called, inevitably, Triplets. So far, so dream-come-true.

But their adoptive parents were angry that they hadn't known about the siblings. Why had the boys been separated? Why did the adoption agency which placed all three boys in their respective families tell them that their sons were part of a "study of adopted children", without also revealing that they had triplet brothers?

As more details emerged, the triplets themselves began to realise and resent the fact that they had in fact been "lab rats" for a long-running nurture versus nature twin experiment led by Child Development Centre director, psychiatrist Peter B. Neubauer.

My reaction at this point, and I'm sure the reaction of most people watching this fascinating documentary is: That is messed up! How could it happen?

One of the strengths of the film is that as Bobby, Eddy and David's story unfolds, it raises as many questions as it provides answers and left me itching to know more after the credits rolled.

Some clues come from people who had worked on the study. Psychiatrist Lawrence Perlman describes in the film the months he spent as a young researcher on the project in 1968–9 when he would visit each of the triplets in turn, recording his observations, and could not let on that he also knew their brothers. "In retrospect it was undoubtedly ethically wrong," he says.

Perlman explored the origins of the study himself in the June 2005 issue of the journal Twin Research and Human Genetics, where he wrote, "Apparently no-one had considered what now seem to have been critical oversights in the study: the twins’ rights to know each other and the possibility that they might meet in the future." He also pointed out that at the time, "informed consent for research subjects was not a required practice".

Perlman interviewed Dr Neubauer in 2004 when Neubauer was aged 91 (he died in 2008), and found he had no qualms: "Neubauer continues to maintain that everything done in the study was proper, and that it conformed to the adoption practices and research standards of the time." …  "The twin study staff believed that a weakness of prior studies on twins reared apart was the twins’ and parents’ knowledge that there was an identical sibling out there somewhere. It was assumed that such knowledge could affect the handling of the child by the parents, as well as the child’s own sense of self. This study intended to eliminate such confounding variables."

Writing in the same journal, psychologist Nancy L. Segal explains how separating twins and triplets for adoption had originally been on the advice of another child psychiatrist, Dr Viola Bernard, who in the 1950s had been advisor to Louise White Adoption Services. Bernard believed that identical siblings growing up together didn't secure a "special niche" in the family: "Consequently, when unwed mothers relinquished their infant twins and triplets for adoption, Bernard advised the agency staff to place the babies in separate homes. Once this policy was in place, Bernard mentioned the separated twins to her friend and colleague, Dr. Peter Neubauer. He replied, ‘They must be studied’."

And so he embarked on a project which ran from the early 1950s to mid-1970s, involving multiple sets of twins and one set of triplets, each child placed individually for adoption, studied regularly and never told about its multiple birth status. Yet the findings were never published and the research was gifted to Yale University in 1990 to remain sealed until 2066, by which time the participants in the study will likely be dead. Which begs the question: what was the point? And if Neubauer thought it was all above board, why bury it?

Lawrence Perlman said it was his understanding that the point of the study was to see what difference parenting styles made to the children's behaviour. But it seems to me unfair to home in on adoptive parents' parenting styles when so much in these particular children's lives had been manipulated, including their separation from each other.

As Bobby recalls: "We all had really tough adolescent years. Just growing up adopted can add another log to the fire, another dimension to the whole identity crisis of adolescence. We were all really emotionally disturbed kids. Sometimes you don’t realise what the answer is until you find it. It’s pretty hard to imagine the answer that we found."

As a result of the media exposure and reunions of separated multiples who were part of the study, some of the participants are now requesting access to their own files from the project.

There's a history of twins and higher multiples being the subject of unethical scientific studies. Josef Mengele conducted horrific experiments on twins at Auschwitz; the identical Dionne quintuplets in Canada were removed from their parents and observed and studied like zoo animals throughout their childhoods in the 1930s.

Three Identical Strangers shows that what might seem acceptable in one era can prove controversial in the next and can have hurtful consequences. As David's aunt says in the film: "When you play with humans you do something very wrong … They didn't have the gift of being brothers for 18 years. They met as adults and hadn't learned to live with each other."

For all the euphoria that surrounded the triplets' teenage reunion, it does not have a happy-ever-after ending.

Fortunately, these days twins and triplets are placed together wherever possible, if they are put up for adoption. We don't assume, as Viola Bernard once did, that twinship is a "handicap". And twin research, done ethically and with appropriate consent, provides valuable answers to nurture versus nature questions, which can lead to scientific and medical progress.

Neubauer's quest to "eliminate confounding variables" by ensuring that Eddy, Bobby and David knew nothing of each other's existence is, from today's perspective, unnecessarily brutal.

Birth order: does your position in the family make a difference?

How to handle sibling rivalry

When siblings get left behind

My relationship with my brother led me to see a therapist