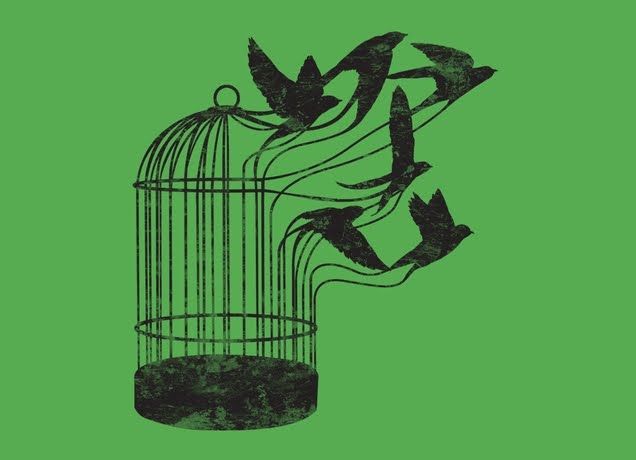 The Psychology of Freedom

We all want freedom but we are not always so sure about what it is or how to attain it. If freedom were merely a matter of not being in a prison cell then the vast majority of us should be free, but we often find ourselves imprisoned by internal anxieties, worries, habits, compulsions, fears, depression, addictions and false assumptions. Equally, you could imprison someone like Socrates, Boethius, Thomas More, Mahatma Gandhi or Nelson Mandela and they would be, in many ways, freer than their gaolers.

True freedom is primarily a state of mind, not a physical condition, therefore the study of the mind is central to an inquiry into freedom. Philosophers and theologians have had much to say about the nature of freedom and the mind over millennia, but the discipline of psychology as we know it is relatively new. Psychology, simply put, is the study of the mind. In order to study and understand the mind we need to observe it. We see how it works by watching what is does. The essential factor is the ‘observing self’, the consciousness, which is doing the watching. If we ignore the observing self, as psychology has largely done until recently, then we may have been looking at the mind from the wrong perspective, like trying to understand it by thinking about it rather than observing it. So, what do a few notable psychologists have to say about freedom?

An American physician, psychologist and philosopher, whose influential work, The Principles of Psychology, is the foundation for modern psychology. Three key themes of James' work related to attention, determinism and spirituality. In relation to attention, he identified its importance, long before the modern interest in contemplative neuroscience, as a prerequisite for understanding oneself and leading a healthy life. James' attitude to determinism was what he called 'soft determinism' abhorring the later limited and fatalistic thinking which subsequently became widespread. He believed we have the scope to freely choose our actions, attitudes and way of being in the world. There may be strong biological and environmental influences on our thoughts, emotions and behaviours beyond our control, but that doesn't define us. To James, the ultimate freedom tied with spirituality. The ultimate freedom, according to James, is knowing God or 'the highest' and selflessly following its will.

Freud's popularisation of psychoanalysis provided our image of the archetypal psychiatrist. He took a gloomy, misanthropic view of humanity perhaps because he formed his theories almost exclusively from a relatively small number of desperately miserable and neurotic people. Freud's influential focus on psychopathology may be the chief reason why for the following century psychology almost exclusively focused on abnormality and mental illness rather than positive psychology and wellbeing. Freud never aimed high as far as therapeutic outcomes were concerned and was openly hostile to religion and dismissive of religious experience. He was a hard determinist of the view that our actions and decisions are essentially predetermined by our biology, upbringing and unconscious processes and, because we are unaware of them, we don't get to choose them nor are they under our control. In this view, free will is an illusion.

Jung was a Swiss psychologist who was originally a close associate of Freud but went in a very different direction to Freud particularly in relation to his views on the unconscious, religion and free will. He was a deeply spiritual man, in part inspired by his familiarity with the world's great mythologies and wisdom traditions, but also because of his deeply introspective and contemplative leanings. To Jung, we are all connected not just by our physical proximity to each other, but also through a collective unconscious. This is like a universal mind which, for the most part, we hardly know exists as we go about our distracted day-to-day existence. The personal transformation from an isolated individual to a free, universal, enlightened being Jung likens to a kind of spiritual alchemy. Hence, self-reflection was something that Jung wholeheartedly embraced but Freud vigorously avoided. For Jung personal growth was about awakening to self-knowledge and self-awareness. Jung believed in free will and viewed hard determinism as merely a mode of thought. If we don't connect with the core of our being and realise that it is continuous with universal being then we will be ruled by instinct, cause and effect as described by Freud. This stamps Jung as being quite distinct from Freud and the nihilism associated with many proponents of existentialism.

Skinner was an American psychologist largely responsible for popularising behaviourism and the experimental approach to understanding human behaviour. Laboratory-based experiments are useful, but they are inherently artificial and limited by the things you can, or choose to, measure and control. Skinner's view of behaviourism is strongly deterministic. He saw free will, emotion and motivation as illusory covers for the real causes of human behaviour - the effect of environment and conditioning on our biology. Thus, Skinner's view was that you could condition or train human beings, like animals, to think or do what you want. You can reinforce some behaviours and punish others thus conditioning the brain and biology to be the way it is. The person who commits a crime has no real choice because they are propelled to it by environmental circumstances and personal history, making breaking the law, for some people, natural and inevitable. For others, being law-abiding is just as natural because of their environment and upbringing. Environment clearly has significant influence on us and the sciences of neuroplasticity and epigenetics give further credence to that view, but there is a risk in taking one factor to be all there is. What works against us can also work for us. Although environment and conditioning do play a major role in determining our makeup and behaviour, we are not inevitably prisoners of them because we can choose environments and behaviours to change the way our brains and genes express themselves.

Frankl was an Austrian psychiatrist whose views were deeply influenced by real-life experiences in Nazi concentration camps. There he had little or no control over his external circumstances but this drove him to discover a deep sense of self-reliance, insight and meaning which profoundly changed the way Frankl experienced his ordeal. It was not that the conditions of the camp changed, but that, paradoxically, he found freedom from the misery by transcending it, by finding meaning within it, and by embracing the opposite to the hatred and bitterness which would have been expected. Freedom, to Frankl, was not an external affair, but an internal one, based on choosing the attitude to any event. This is radically non-determinist. Frankl, when asked to comment on Skinner's view, said, "Man does not cease to be an animal, but at the same time He is infinitely more than an animal. ... Everything can be taken from a man but one thing: the last of the human freedoms - to choose one’s attitude in any given set of circumstances, to choose one’s own way.” [1] An important part of the ability to choose and transcend is objective awareness which Frankl likens to a space between stimulus and response strongly echoing the emphasis on awareness previously exhorted by various wisdom traditions and later exhorted in mindfulness-based approaches.

Seligman is an American psychologist very active in redirecting modern psychology's fascination with psychopathology and encouraging it to explore the realm of positive psychology. Seligman's early animal research led him to discover what he called 'learned helplessness' which arises when you consistently create painful situations from which the animal can't escape. Soon it ceases trying to escape even when the potential for escape is reintroduced. Seligman drew parallels with people living with depression who, being unable to escape the thoughts and feelings they did not want to experience, learned a kind of helplessness and resignation. Rather than just mitigating the symptoms of psychological distress or masking them with drugs Seligman wanted to use the positive resources a person had within themselves such as character, strengths and virtues. The conclusions he and co-researchers came to echoed what many wisdom traditions exhorted for millennia. Positive psychology is in part deterministic in that happiness is in part determined by genetics and environment, but it also acknowledges the importance of freewill for it is within our ability to choose what characteristics and resources we cultivate. Pessimism leads in one direction and optimism in another. Seligman's views on choosing the beliefs we focus on in times of adversity strongly align with Frankl's. People whose disposition to happiness is primarily eudaimonic (happiness as meaning) tend to be far happier and more resilient to stress and disappointment.

Kabat-Zinn is a molecular biologist, not a psychologist, but through his long-standing passion for teaching and researching mindfulness he has had a profound effect on the modern understanding and practice of psychology. He developed a deep interest in Buddhism and mindfulness meditation and took what he learned into the community. Kabat-Zinn’s work attracted significant attention from a group of prominent psychologists and researchers, John Teasdale, Zindel Siegel and Mark Williams, who were looking for new strategies to help with the escalating rates of chronic, relapsing depression. They developed Mindfulness-Based Cognitive Therapy (MBCT) and found extremely promising results which have been consistently confirmed in many studies since. [2]  [3] Mindfulness-based approaches are revolutionising psychotherapy with the first and most central point being the cultivation of awareness. Without awareness we are essentially an automaton, without understanding and with no conscious will of our own: a state called 'automatic pilot'. In such a state the hard determinism of Freud and Skinner might be a fair description of the human condition. Dissatisfaction, regret, addiction and fear essentially come from ignoring the present and living in the imaginary future or relived past. In our restless, unmindful search for happiness we constantly look for things outside ourselves. What we find is impermanence and constantly missing the bedrock of our being to become a prisoner of the mind and its contents. We tend to identify ourselves with passing thoughts and feelings and take them as facts. Liberation from suffering and distress therefore lies in our ability to rest in simple, non-judgmental and compassionate awareness and not to be so moved by transient mental or sensory experiences. If we cultivate awareness and non-attachment to the mind and its contents, then we have the opportunity to live more fully and authentically and without the same level of hindrance from our moods, compulsions, desires and addictions.

Developing things like self-awareness, self-actualisation, non-attachment and acknowledging a deeper, observing self are ways to avoid or to extricate ourselves from the mental traps we unwittingly stumble into. The bottom line is, we do not have to be trapped by the mind. If we train and use it well the mind resembles a faithful servant rather than a tyrannical master. That, however, requires some wisdom, patience, perseverance, careful guidance, courage and more than a little self-compassion.