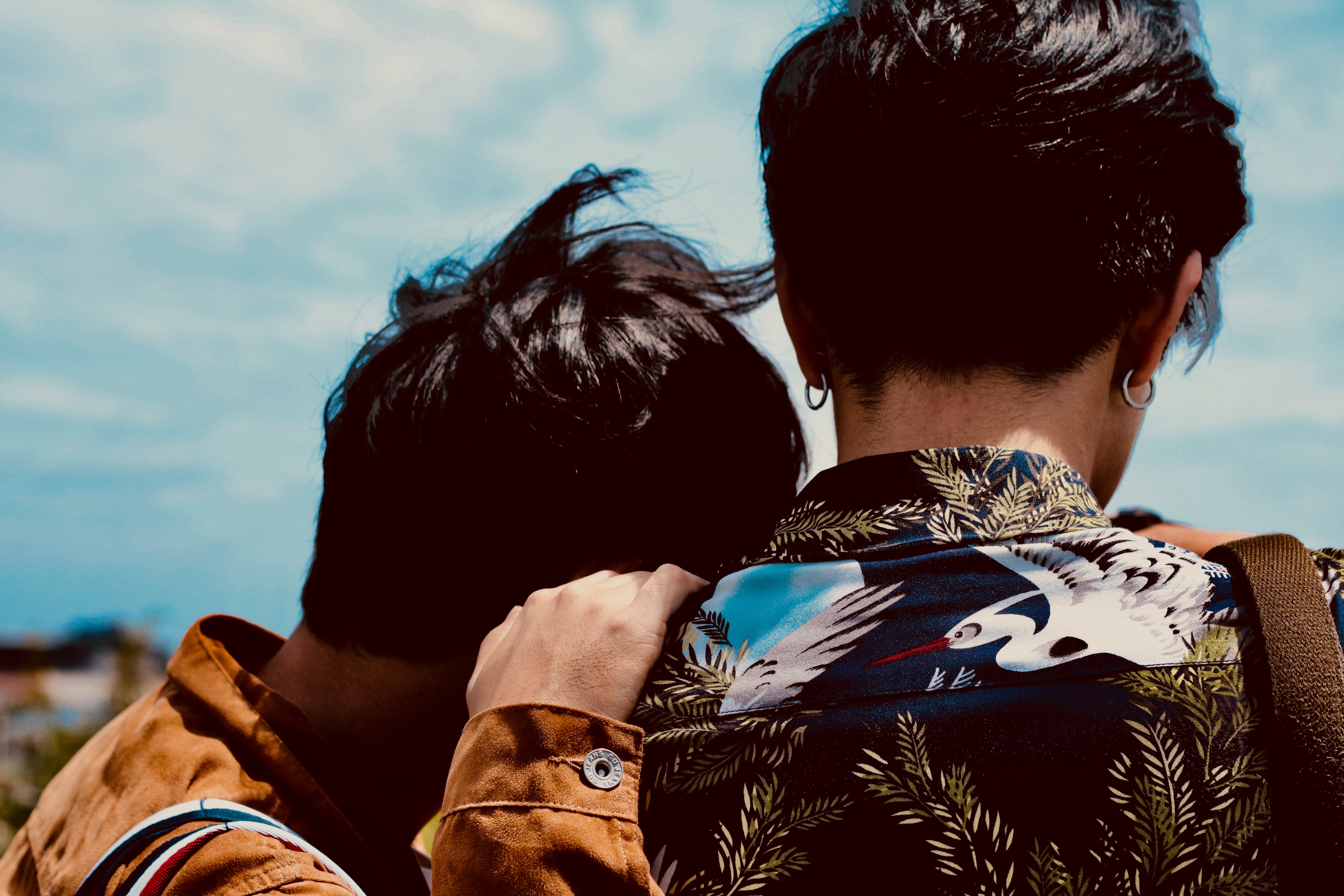 Anti-LGBTQIA Abuse and How to Respond to it

This morning an old man shouted at us in a supermarket in Sydney, that we should be hung for being gay. This was after he saw us touching peaches, to see which one is was ripe enough to bring with us to the beach. He yelled about how disgusting we were and instructed us not to touch any fruit with our gay hands. He also asked if we wanted to touch his bum (we didn’t). He shouted, we shouted, everyone was watching. The staff looked startled; they didn’t seem to know how to respond to a situation like this. We left the supermarket, felt shaken and couldn’t stop talking about it. We looked at each other, we comforted each other, hugged and talked more. My fiancé messaged the supermarket chain; I tweeted them.

We got to the beach, sat down, ate and watched people. I could feel being on high alert – looking around, waiting for the next abuse to come. I couldn’t settle. I looked at Pedro and he seemed upset too. I asked if he was okay and he said, ‘I was really expecting him to say something racist to me as well.’ I felt powerless and angry. It wasn’t just the homophobic abuse he had to deal with this morning but also the fear of anticipating a racist attack. I didn’t, still don’t, and will never know what that is like.

There was a shared urge to move about, to walk. So, off we went to look at houses we couldn’t afford.

We began to ease more into the day as we got to a bus stop. The light looked good, so I took a picture of him. He then took a picture of me, then we took 47 pictures of the two of us. Only to then pick the best out, however pretentious it looked. Then going back and forth, indulging in our vanity, choosing between a smiley one and the serious one above. This then became the very picture he chose to use to announce our engagement to his family.

It was as if the abuse in the morning didn’t happen.

Having an engagement photoshoot at a bus stop following the abuse we encountered in the morning was not intentional. It was not a defiant act, made to turn the day around. It happened without us even noticing it. We only realised that these two events happened on the same day, hours away from each other, when we looked back on our pictures, weeks later.

I felt comfort knowing that we wouldn’t have ended up in that bus stop if the abuse didn’t happen. I’m sure the man from that morning would be thrilled to know that he played a small part in us deepening our relationship with Pedro’s family. My first cliché of a thought was to create a montage, putting these events next to each other with a title about love winning. But then it occurred to me that the only reason love won that day was down to our privilege and luck. Our privilege of having each other and being well-supported, and our luck of being together when this happened.

As I was looking at our pictures I remembered an event that occurred earlier last year when a man walked up to me on my daily commute, looked at the necklace I was wearing – a golden necklace that had belonged to my grandmother – and shouted that ‘there are too many gay people in this country, and they should be shot down!’ I got off the bus in shock. I called a close friend and sobbed. I felt hurt and shame. I thought that there is something wrong with me and all this man did was to point it out. I suddenly felt very conscious about what I was wearing, about how I walked. I found myself thinking about my tone of voice as I greeted the receptionist at my office. I sat down and thought to myself – people around me are only pretending to accept me and this man somehow channelled what everyone is really thinking – the truth that I am inherently less than others.

I wasn’t lucky enough that day to have someone there with me and so it was harder, but I was privileged to be able to call people close to me and be comforted by them. I was then able to carry on with the day and felt less alone.

As I’m writing this, I’m thinking about the LGBTQIA community. I’m especially thinking about Black people and other people of colour in our community who continue to be oppressed against in multiple ways. I’m also thinking about those of us who are not lucky enough to not be alone or privileged enough to be able to reach out to someone as they’re encountering homophobic, transphobic, biphobic abuse. If you are that person, and you do encounter or have encountered such an attack, then it is important you remind yourself that what occurred was a crime. It should have never happened to you. You are worthy. You have not deserved this. You are not alone.

What to do when it happens to you

Although reacting to the crime can be cathartic in the moment, it is important you bring yourself to safety first. You will most likely feel shocked, hurt and angry. As a result of the shock you might get triggered and think that you should have dressed differently or that the attack was somehow your fault. You may even find yourself jumping to thoughts of feeling deserving of what happened. When you’re exposed to rage, which individuals who commit hate crimes carry with themselves, you’re most likely to be triggered back into your wounded place. Remember this is not your failing, however okay you feel about yourself generally, it is just the way we respond to gravely unprocessed anger – we absorb it.

Calling a friend or someone you feel safe with, whoever it may be, cannot be underestimated. Hearing someone reassuring you immediately after the event has the power to reduce what happened to a harmful incident and not let it become a damaging one. You may consider reaching out to the police (999), especially if you’re unable to take yourself out of the situation. If this is something that happened to you but you’re safe and not in an immediate danger, you may also consider calling the non-emergency police number, which is 111.

You may consider reaching out to an organisation, like GALOP. They are an LGBT+ anti-violence charity. They are able to get you in touch with an LGBTQ police officer, meaning you can report the crime you were the victim of to someone you might feel safer with. One of the symptoms of such abuse is feeling powerless, and so contacting someone or an organisation, like GALOP may give you a sense of control back. Reporting such crimes - even if you are only comfortable doing it anonymously – matters. It helps the police track the increase of such events and therefore can support them in asking for more funding, to combat anti LGBTQ hate crimes.

Although crimes based on sexuality and gender identity are not recognised as aggravated crimes, such as racial or religious crimes in this country, there is a growing recognition for the need to change this. In terms of looking after yourself emotionally, it helps to talk to a person who gets it, who will take it with as much seriousness as it needs taking with. Another organisation you may want to consider is ELOP (East London Out Project) as they offer low-cost counselling for the LGBTQ community. With some form of support, you can begin to feel separate from the incident sooner. It is then more possible to liberate yourself from shame that belongs to the perpetrator, not you.

What to do when you see it happen to someone else

Staying in safe, close proximity and attending to what is happening can in itself be helpful as the victim doesn’t feel alone with the perpetrator. Recording it could be useful too but again, you need to feel safe enough. Focusing more on the person who is receiving the abuse can be far more powerful. Rather than there being several people shouting back and forth, you could always move closer to the victim and reassure them, ask if they are okay. You can even gently ask them to focus on you, not on the abuser. An immediate compassionate, normalising act like this can go a long way in reducing the damage of the attack.

When someone receives abuse, their immediate needs are not complex. They need to feel safe again and they need someone who sees what is happening as wrong and makes that clear to them. Receiving abuse based on homophobia, biphobia and transphobia cuts deep. It shakes a person’s sense of safety; it pushes them back to their memories of being viewed as less. For some victims someone shouting at them might just be one of the many things they are struggling with at this point concerning how others view their identity. It is then not hard to imagine that the abuse you are witnessing could be the trigger event that makes them want to retreat and give it all up. Only through understanding this you can begin to appreciate the gravity of such a situation. And as you do, it practically becomes impossible to not reach out to the person who is being abused in whatever safe way this is possible for you to do.

Dàvid Darvasi is a verified welldoing.org therapist in Central London and online

The mental health toll of racism