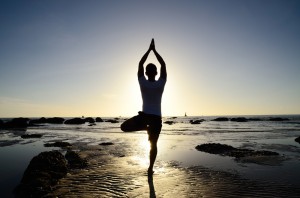 In ten years of practicing yoga, I have never been alongside more than the odd man, usually glimpsed once and never seen again. Yet a quick head count at my class the other month confirmed my suspicions of a growing phenomenon: the women were outnumbered.

What brings men these days to a yoga class? The newest recruits have a quick answer: Ryan Giggs. For Euan, 42, the footballer was the deciding factor. “I didn't really know what I was getting into," he says, having been persuaded to try yoga to relieve the aches and stiffness that often followed sports sessions. “When I heard that Giggs did it I thought, maybe it is for guys like me." His friend Dave concurs: “Ryan Giggs definitely had an effect. I always thought it was a bit fey before."

While Digby Platt, owner of Stonemonkey yoga studio in Leamington Spa, credits celebrities like Giggs and Hugh Jackman for raising the profile of yoga among men, he is certain that it is also the emergence of stronger forms such as Ashtanga that has altered men's perceptions of what yoga actually involves. “When I demonstrate the more challenging poses," he says, “Men say 'wow'. Ashtanga is hard work, and men respect it."

Lilley Harvey, who runs Peacock Tree Yoga in York, would agree. When she wanted to attract more men to her classes, she put photos of her husband in difficult postures on the publicity. “I had a massive increase in men coming along," she says. She believes that men appreciate the physical element, but also the discipline that yoga requires.

The celebrity endorsement doesn't appeal to all men, and neither is it purely about fitness. Men such as Richard and Karel had “always been drawn" to it, although they shied away from the word 'spiritual'. “I'm sceptical. I couldn't teach yoga if I didn't believe that it worked," says Digby, “It's about seeing its relevance to the world, not an esoteric enlightenment."

The men I spoke to were mostly in their 40s, and although some had started yoga to complement their exercise regimes, many had come to relieve the pressures of personal difficulties or stress. All spoke enthusiastically of the benefits: Dave has found himself sleeping better; Euan has been worrying less. Richard describes himself as calmer and clearer, more laid back and patient – changes that his friends have also noticed.

Nor does men's discovery of yoga seem to be a passing fad. “Once you get a man to a class they'll commit," says Lilley. All the men I spoke to were adamant that they would continue; for Karel and Richard it is one of the most important things in their lives. There have also been unexpected reactions from others – Digby's mates “took the piss" when he started 14 years ago, but are now coming along. Lilley's newest recruits are “hard Yorkshiremen".  Euan has found that, despite “dreading mentioning it" to his group of friends, they were intrigued and supportive.

There may, of course, be another reason why some men come to yoga: more than one person speculated that younger men try out classes to meet women. If this is the case, they may be in for a surprise…