Watching the Clock: How Time-Keeping and Trust Relate in Therapy
Find a therapist
Find a coach
Join as a practitioner
Log in/register 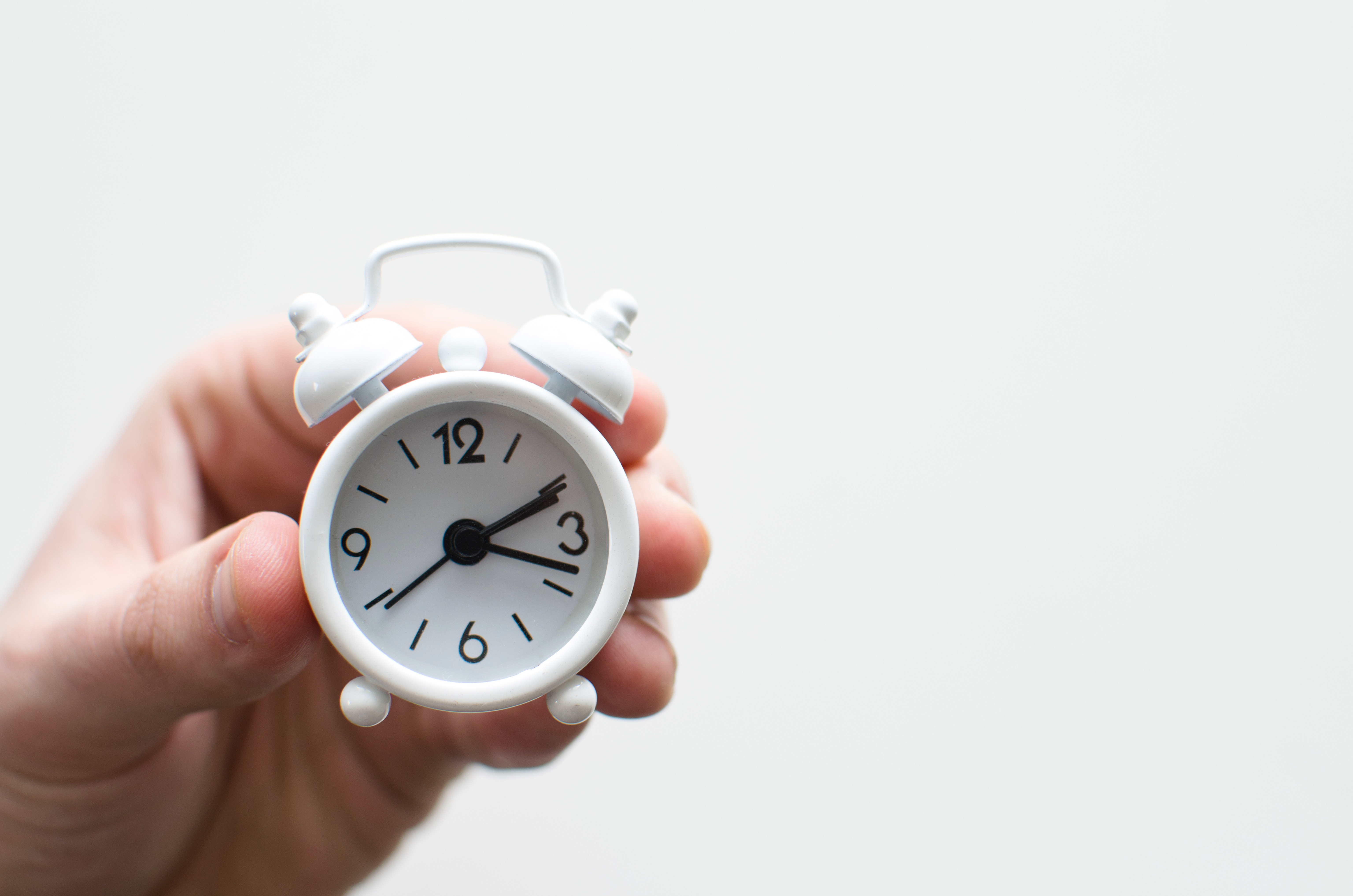 Watching the Clock: How Time-Keeping and Trust Relate in Therapy

The first thing I do when I walk into my therapy session, even before I sit down, is to check whether the small clock on the chest of drawers facing my chair, is turned away so that I can’t see it. My therapist has her own way of keeping an eye on the time – a separate clock on the bookshelves somewhere above my head. And when we return from a therapy break one of the first things I do is to resynchronise my watch to her clock  - to try and make sure that I’m neither early nor late, and that I arrive just when she is expecting me.

Time is one of the many practical parameters of therapy, and the relationship that we have with it, in the context of the session, can be informative in and of itself. The same goes for a number of other parameters, such as the environment of the therapy room itself, or what we choose to wear to therapy. And so, for example, my need to arrive and leave on time comes from a fear of intruding into my therapist’s time and space, which in turn comes from my own experience of being intruded upon by my parents.

There are a number of reasons why I prefer not to be able to see the clock during sessions, but the most important of these is to try and avoid ‘stage-fright’. This is the term my therapist used once, to describe what happens when we hit the ‘fifteen minutes to go’ mark, and it made such an impression that the term stuck. I used to find that I would regularly get through forty-five minutes of a session and then be seized by anxiety once I realised there were only fifteen minutes left. I would lose the thread of conversation and start to worry I hadn’t made good use of the time. I would become uncertain what I ‘should’ be talking about next – should I try and wrap up the conversation we were having, or should I simply carry on? It was even worse if the conversation had come to a natural conclusion, as then I would find myself paralysed by the decision of whether or not to start talking about something new with such a short time left, knowing we would leave things ‘in the middle’. I sat in silence, trying to decide, while the minutes ticked away; inevitably, the lack of a decision was a decision in itself. We ran out of time, I felt even more as though I’d wasted an opportunity, and I left still with the heavy weight on my chest, of the subject I had been wanting to talk about. Anxiety over losing time and over poor decision making, is another constant theme throughout my life, the origins of which are still not entirely clear to me.

Turning the clock face around seems like a simple, practical solution to this difficulty, but it would not have been possible for me in the first couple of years of therapy. For me, taking my eye off the time was intimately linked to trust in my therapist, and confidence in the relationship. The thing about having a very definite limit on your time with someone, is that there is significance in the way that you say goodbye. Every session involves practising an ending, and every ending has the potential for therapeutic material of its own.

For the first couple of years of therapy, I would always try and make sure that I ended the session first, instead of waiting for my therapist to indicate that our time was drawing to a close. Turning up to a therapy session with no agenda, with no eye on the clock, and placing yourself in someone else’s hands to be there to catch you while you lead the way into the unknown landscape of your subconscious, takes surrender to the moment, and trust in your therapist. It was a very difficult thing for me to do, as safety used to mean control of myself and my environment, as much as possible, and a great reluctance to trust and to depend on anyone for help, guidance, or emotional support.

But more important even, than trying to control the session, was that I could not bear to hear my therapist ask me to leave – because that is how it felt, rather than her words simply being an indication that the session was over. At times when the relationship was difficult and I felt confrontational and angry, I heard words like “so, are you going to chuck me out now?” leave my lips at the end of session, betraying all too clearly my sense that ending felt like rejection and abandonment. It also, perhaps, echoed an unspoken fear about conflict in the context of our therapeutic relationship – if I continued to be ‘difficult’ and angry, would she give up on me altogether, and would she ‘send me away’ not just for that day, but for always?

It was a clear indication of the change in our relationship and the trust and safety that I experienced, when I felt comfortable enough to take my eyes off the clock, turn it to the wall, and wait for her to close our sessions in whatever way and with whatever words she felt were appropriate at the time, without feeling threatened or hurt.

I’ve found that the presence of the session time limit, can also lead to an unconscious ordering of topics to be talked about. That ordering contains information on the way in which I perceive those topics – how important they are, or how frightening or shame-laden – as well as on how I’m feeling about the therapeutic relationship. Just after a therapy break or during difficult times in therapy, I’m more likely to try and spend a few minutes at the start in informal and light-hearted conversation, building up from what I perceive as less important, to more important topics. It feels as though I’m trying to re-establish a sense of connection, and reassure myself that our relationship is unchanged. In contrast, when the need for reassurance is absent, I find I’m more easily able to simply jump into a difficult topic, with little introduction.

Perhaps because of this build-up from least to most important, or perhaps because of fear, I also often find myself raising important and sometimes distressing topics fairly close to the end of sessions. I feel frustrated with myself when I realise what’s happened, and to some extent I think it’s a form of self-sabotage. I am particularly conscious, at these times, of wrapping up the session on time, as I don’t like the thought of my distress intruding into my therapist’s personal time.

Raising important topics near the end of sessions is not unusual, and I think it’s always worth thinking through our unconscious motivations for doing so. Some of the questions I’ve asked myself are as follows. Am I afraid of my therapist’s reaction to what I have to say? Am I ambivalent – feeling both a desire to be ‘seen’ by my therapist, as well as shame at what she might see? Do I want to create a cliff-hanger, like the end of a good book chapter, which allows me to feel that I am interesting to my therapist, making it more likely she will look forward to seeing me again? Do I hope that my therapist might extend the session by a few precious minutes, providing reassurance of the fact that she cares for me? Am I punishing my therapist - deliberately holding back, and using that as an expression of displeasure or rage? Am I self-sabotaging by creating a difficult ending to the session, thus potentially setting myself up for an equally difficult start to the next one? The possibilities are as endless as they are complex, and once we’ve identified what our own particular patterns are and which potential explanations ring true, then starts the work of trying to identify the origins of those patterns, and trying to change them.

Time, and its meaning for us, hangs over not just every session, but over the process of therapy itself, as well as over so many other aspects of our lives. Dealing with the parameters of session time in therapy holds up a mirror to the ways in which we relate to finitude, separation, control, trust, and a whole host of other issues and experiences. Jim Morrison wrote, in the Doors song ‘Roadhouse Blues’, that “the future’s uncertain, and the end is always near”.  That is as true of a therapy session, as it is of life as a whole; but thankfully, though we only live once, we have numerous therapy sessions in which to experience and examine our reaction to that inevitable truth, and to understand and work on who we are, in the face of it.