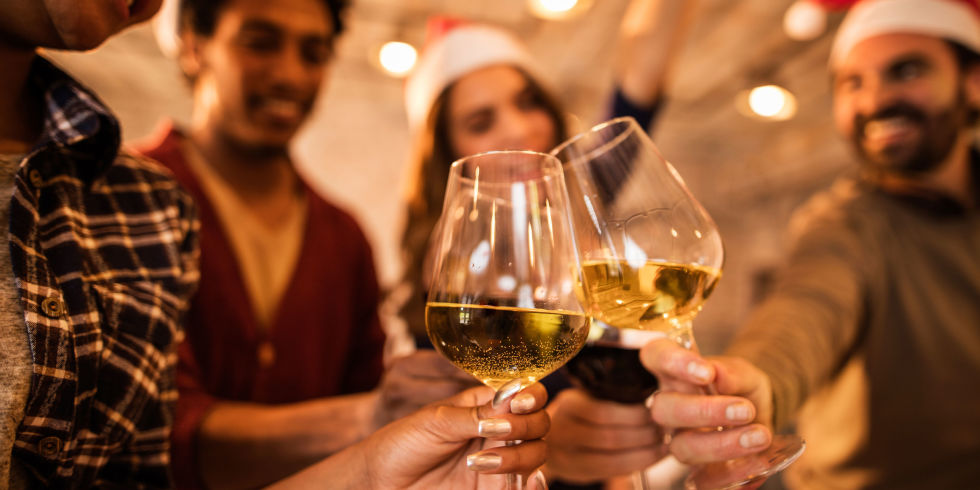 The Two Kinds of Drinking at Christmas

There are two types of drinking at Christmas. Firstly, there is the ‘mistletoe and wine’ drinking. The good side of drinking, the Dickensian side of drinking. Good friends coming in from the cold and snow into a warm room of dark oak with a roaring fire, flagons of frothing ale, sweet, spicy mulled wine, drinking, laughing. Spiced cider, red wine, carols, dark wood, the smell of exotic spices, remnants still of a festival more ancient that Christianity, the midwinter solstice, 12 days of feasting and drinking to ward off the cold and the fear that the days, instead of now becoming longer and warmer, would simply continue to get shorter and colder until the whole world was plunged into frozen darkness.

Then of course there is the reality of drinking. Office workers vomiting and unconscious under the glaring neon lights of Liverpool Street station because they’ve overdone it at their Christmas party, waking up at four in the morning with no memory of going to bed but a sure and certain knowledge that there was some kind of upset or anger or argument, a feeling that feels like a physical lump in your chest, a feeling of misery and despair that you are going to suffer from until that next drink. Feeling tired and irritable and out of shape and lethargic.

So am I saying that the mistletoe and wine drinking doesn’t exist? Thinking about drinking in this way makes us vulnerable to missing the real essence of what is going on at least to some extent with everyone who drinks a lot over the festive period. It misinterprets it entirely and then places an entirely disproportionate amount of emphasis on one minor aspect, and turns a sometimes brutal and vile reality into an insultingly inaccurate lie.

Every single alcoholic drink that is drunk over Christmas will contribute towards disturbed sleep, a corresponding feeling of anxiety, and the poisoning of a human body. As the number of drinks an individual drinks on each occasion increases so do the ill effects, with the potential to move from disturbed sleep into insomnia, from anxiety into increasing worry, fear and even depression, and from almost imperceptible poisoning into full blown hangover, nausea, and headaches. And of course other effects then come into play, as our emotional wiring short circuits we end up with the arguments, tears, anger and, for many, physical violence. Money being spent that many cannot really afford. Health being eroded and seriously damaged. The mistletoe and wine Christmas doesn’t touch on any of these.

My Christmas this year will be like all my Christmases since I have stopped drinking. It will be a happy time, a time to spend with my family, to see a little magic take place, to spend time in the warm with friends, a time to be as free from arguments and anger and tears as it is possible to get with a young family. A time to be as happy as it is possible to be, bearing mind the usual stresses and worries of everyday life. This is as close to the idea of the Dickensian Christmas as it is possible to get and it won’t be because of alcohol that I experience it, in fact it will only be possible because alcohol no longer factors in my life; if it did then this wouldn’t be what I could expect from Christmas, what I would be looking forward to would be more tiredness, arguments, hangovers and depression.

It was all the downsides to drinking that became increasingly damaging the more I drank that motivated me to stop drinking in the first place. But what has enabled me to stay stopped, is that life for me is far, far more enjoyable without drinking. I have a feeling of confidence, calmness, and capability, that I simply didn’t have during my drinking years unless I was actually drinking. I had to spend money, to poison myself, to go through arguments and misery and exhaustion and the loss of all dignity to get, for a few small moments, a feeling of confidence and peace that I could have all the time if I only stopped. That is the feeling that will make Christmas fantastic for me. This is the great secret of stopping drinking: the vastly increased quality of life. I feel like I can deal with whatever life throws at me and I don’t need a drink to get that feeling. Losing that feeling affects your entire life. It is simply too big a price to pay.