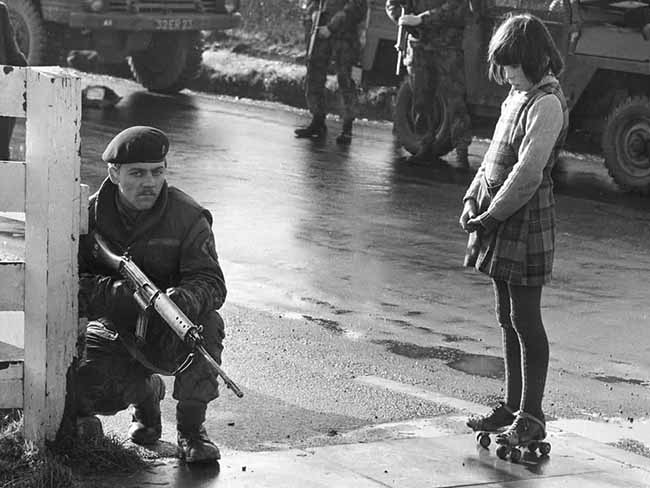 The Psychological Impact of the 'Troubles'

Like most other little boys when I was young I loved playing with Action Man, toy soldiers and plastic machine guns. One summer afternoon, I think I was about six or seven, I remember some dark green armoured vehicles pulling up outside where I lived. My friends and I were really excited and ran up to meet them where they’d parked. My friends and I were shouting up at a young soldier in the small turret at the top to look at our action men and asking if he would show us his gun. Some of us even climbed up onto it telling him we were going to join the army when we grew up. The whole time the soldier was nervously scanning all around him while asking politely if we could please climb down off the vehicle. At that point my mother, and some of the other mums, came out with the same expression on their faces and told us we had to come inside. The soldiers were nervous, the mums were nervous. That was my first ever memory of feeling something wasn’t quite right. The first time I learned I had to be careful who I talked to.

I find it interesting looking at how, generationally and societally we tried to manage the trauma of what became known as the ‘Troubles’. In some areas of seventies Belfast, regardless of what side you were loyal to, whether you wore a uniform or a balaclava, stress, terror and trauma was dealt with usually by taking alcohol.

I believe at the very core of trauma is not only a feeling of helplessness but also a feeling of being disconnected. In many areas terrorised by violence few felt safe enough to talk about what they’d done, seen or experienced. Few wanted to admit to feelings of fear, terror, regret or powerlessness so instead either internalised it, turning it inwards until it became unmanageable or lashed out aggressively to others, even loved ones.

However we need others to validate our experiences, mirror us, normalise what we feel, and in many cases the social aspect of drinking with others offered just that. A space to unload in the company of others who had perhaps experienced the same thing and a way for us to feel connected.

By the time the late eighties, early nineties came, everything needed for an addicted society was in place. Alcohol was readily available, there was rise in underage drinking. It had by then become cool to drink as much as you could without getting drunk to show how hard you were. During my late teens there were many weekends I planned to go out with friends just to get drunk. It was what we did.

Today in some areas, not even just those maybe still under the influence of sectarianism or violence, alcoholism may have become a way of life. I’ve noticed if someone says they don’t drink the first question usually asked is: ‘why not?’

My father, the alcoholic: the impact of addiction on childhood