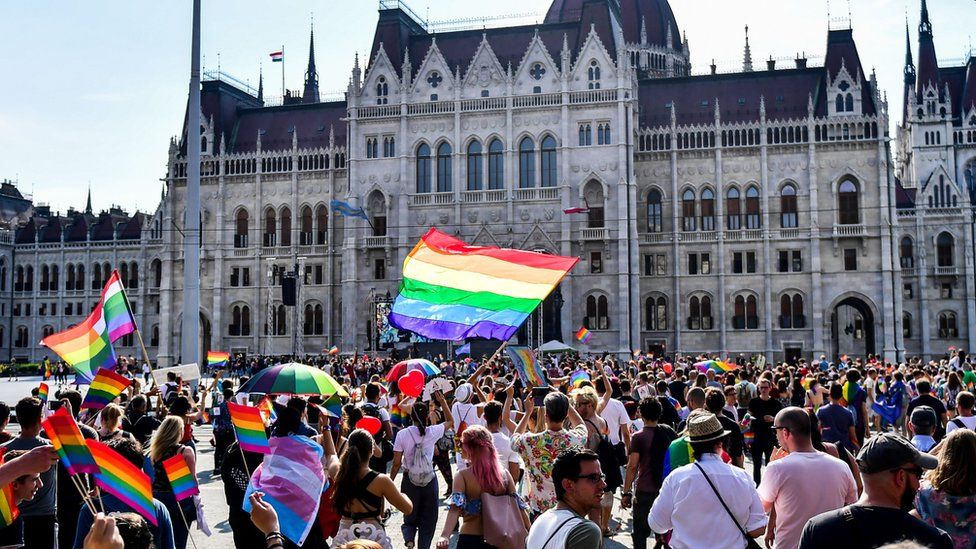 Pride and Shame in Hungary – A Therapist’s Personal Reflections

Hungary’s prime minister Orbán just passed a bill to ban LGBT literature for under 18s, including educational material and advertisements. Orbán tacked his bill to a separate, widely supported bill that strictly penalises paedophilia. Having done this, he’s not just made it much harder to vote against it but painfully conflated paedophilia with the queer community once again. This is after having passed similarly targeted bills over the last couple of years that have had the following implications – no joint adoption by same-sex couples, no adoption of same-sex partner’s child and no legal recognition of trans people. All this to preserve so-called ‘Christian values’ and to protect children.

It has been a long time coming for me to be OK with my trans identity. Something I’ve always felt in my core but didn’t have the words for it. I’ve been crying on and off since I first read about the bill and I started writing to feel a bit more in my power.

Conversations around gender or sexuality diversity when I was growing up were non-existent in Hungary. When conversations don’t exist about a certain group of people and their experiences, those people get erased (sometimes they manage to draw themselves again with support, sometimes the erasure is permanent). Silence feeds dehumanisation – we see this not just with gender but with race, disability, immigration, poverty, sexuality, and so on. Gender-expansive and transgender people turn into an ‘ideology’ and people with diverse sexualities into ‘homosexual propaganda’.  To exist is to have yourself reflected back to you, not as an object to abuse, not as deviation, not as pathology, not as a fetishized token, but as a person.

A queer children’s book - Wonderland Belongs to Everyone - was published last year in Hungary and its publication followed several months of public debate. The right-wing government jumped quickly to label it as ‘homosexual propaganda’ and the publisher with the help of psychologists were having to prove to ‘experts on folklore and fairy-tales’ (not a made-up title) that it will not traumatise ‘normal’, cisgender, straight children. It breaks my heart to think of all the trans and queer children in Hungary watching this on TV, thinking that other children need to be protected from them. What children need to be protected from are adults who can’t or won’t recognise that they might not understand what is happening in a child.

The actual trauma a child will experience is by watching adults debate their existence. Unprocessed, deeply-seated internal prejudices still have permission to be vomited out on live TV onto people watching. Whispers, unfounded fearmongering and shame are what I wish I had more protection from.

I was 10 years old when we sat down to watch our favourite TV series as a family. A character came out as gay. I remember because it connected with something in my belly that felt like excitement, confusion, nervousness all in one, only to be transformed into overwhelming fear when a loud ‘euugh!’ came out of my father’s mouth only to be followed by a calm, considered statement that was hard to process, and still hard to not feel annihilated by: ‘If one of my kids were gay, I’d kill myself.’ He then carried on watching the TV as if nothing happened. He didn’t realise that in that moment he attached an inherent wrongness to the natural arousal and connection I felt by what I saw. His words have also worked against any sense of worth I had the years following as well as catapulted me into the high-alert state of trying to escape my own skin so as to not feel responsible for his death.

They were plenty of distinct, explicit messages around what it means and should be to be a boy or a girl when I was growing up in Hungary but no recognition that some kids will just not fit that, however hard they’re being forced to do so. I am now a soft-spoken, androgynous-presenting person married to a man in London but when I was 14 in Hungary, I was desperate to become a visibly masculine, straight man. Brute force, silent, focused, hardened masculinity were characteristics to celebrate. Hard skills for boys, soft skills for girls. Anything else is at best odd, at worst something to reject, to ridicule, to humiliate. I needed to see and meet people who were more open and more diverse, and this was hard to come by where I grew up, not because queer people weren’t there but it was near impossible to be safely out.

‘I’m OK with the ‘gays’ as long as they keep to themselves!’ is a statement that is still okay to chant in Hungary. Such conditional acceptance holds an implicit notion of us being something to put up with, to tolerate, and yet we’re meant to be grateful for it. Trans people are not even treated as people but ‘objects’ to alienate. Seeing people go out on the streets of Budapest to protest against the bill is what makes me feel grateful. Seeing those images are moments of pride for me. Visibility, representation, a protest shows a public pushback. It shows that the children in Hungary affected by this bill matter. And make no mistake, every kid is affected by this. Orbán and his supporters argued that LGBT education can affect the ‘healthy development’ of a child. Precisely, the opposite is true. Not being able to learn about diverse experiences in an accepting environment is what narrows the mind and stunts development.

Queer and trans children just like other children develop their sense of self through the reflections of adults in a given cultural context. Knowing that others like you exist is not enough. You also need to feel as though their existence is accepted by people who have the greatest influence on you. Parents and caretakers can defy their cultural context by embodying the recognition, acceptance and care that the government in Hungary are so gravely lacking.

What can we all do?

Reading up on and engaging with trans and queer people around you are important but what we need more of is not just educating ourselves but reflection (both self and institution). We need to place less burden on minorities to do the teaching and the reflecting. Open the conversation wherever possible to race, to gender, to sexuality. Be curious about an individual’s experience but involve yourself too. Instead of pressing someone to talk about their gender or sexuality to you, reflect on your own relationship to your gender and sexuality, its limitations and possibilities. It doesn’t take long to see how our unquestioned ideas about gender expectations contribute to the shocking number of men dying by suicide just in the UK every day or the abuse women receive when they are not aligned with those expectations.

Allow yourself to feel powerless and rageful and sad when you read about hate crimes or homophobic and transphobic bills being passed. Breathe into it, seek connections with it. Your emotional response will propel you into some form of action and it will not just soothe your nervous system, but you will do something good. If you feel numb reading about this, then try and be curious about it. It may be a protective response because it’s too close to home or it may not be something that personally affects you. There’s ought to be someone in your life though who might feel more impacted by what you’re reading. Thinking about them in relation to what you’re reading may deepen your capacity for empathy, which can only be a good thing, but it may also allow you to sensitively connect with them/check in with them.

Why is language important?

Kids, like adults need permission to be. We don’t know what lives inside them until we can give them something to connect to. In other words, they need options – yes words. We only call those words labels when we’re concerned with a minority experience. We call those words facts when it responds to a largely held, collective idea of what’s acceptable. This is how we end up thinking that being a man is a fact and being trans and/or non-binary is a label. When we have no words for our experience we can end up in a state of near or complete psychosis. Permission to not be straight or cisgender does not have the power to ‘produce’ more queer and trans people, it simply enables the safe, rightful emergence of their experience. A trans or queer person should have the same right to locate themselves in society as a cis man or woman. When I see conversations that are overly occupied with arguing against certain words and labels, I get suspicious and I look for the people in the conversation, I think of the lives they’re so freely debating.

If you feel overwhelmed reading about this bill, be as gentle to yourself as you can. Though you might feel its impact the most, know that the passing of it has nothing to do with you.

It has to do with a calculated, fear evoking agenda of a government that is desperate to stay in power. Being politically weaponised has nothing to do with your empowerment and your worth. We need to seek that in and from each other. You’re not to be debated about but to be loved and supported.

Practical ways to support yourself and the Hungarian queer community

Dàvid Darvasi is a verified welldoing.org therapist in London and online

Anti-LGBTQ+ abuse and how to respond to it