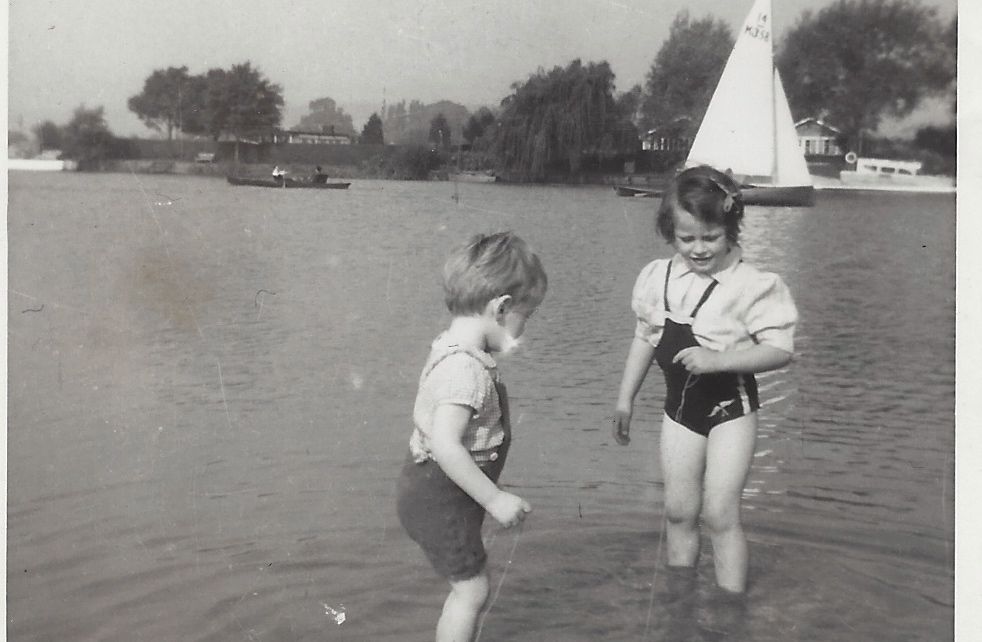 Throughout my 20s and 30s I saw people going into therapy as a different species, inhabiting a different emotional terrain to mine. I might get into incomprehensible states about things, reel at what felt like rejection over the smallest things; give headspace to toxic, malign feelings about someone I thought had treated me wrong. But if there was a problem, I should be able to sort it out myself. Shouldn't I?

The day eventually came when I knew I couldn't sort it out myself. My brother and his wife were coming to visit with their first, new baby and I was hideously aware of how my feelings of resentment could damage our relationship irreparably.

A friend suggested I see “someone" and put me in touch with the therapist who has been a life-support system, guide, and bestower of a toolkit for coping with life.

The backdrop to to all this is a relationship with my brother which stretches back to the time he was born, two and a half years after I, thus knocking me from my place of solitary supremacy in our parents' lives. I know I sought to keep him under my control, playing with him on my terms, letting him join my friends and I in a game only if he accepted an inferior role, etc. But we were also close, in the way that siblings knit together as a unit, against parents, and at times the world, and finding that scrambling up trees, kicking balls, meeting each others' friends in time, are all the bonus of brothers and sisters.

Our close link remained through the years even as we went our separate ways in work and social life. And we always had family celebrations at home, with our eccentric but loving father and lovely mother. The warmth that wrapped us close as a family is still a cherished memory.

But then, when she was 50, my mother died of a brain tumour and my father fell to pieces, disintegrating into a needy emotional wreck with no sense of a reason to live. I was offered a job in Amsterdam and, cruelly I now realise, accepted it and fled from the despair of my father's life, leaving my brother to stay with him in the increasingly bleak family home.

At the same time my brother's girlfriend returned to her native Australia for university. I didn't see it at the time, but his was a triple loss: his mother, sister and girlfriend all gone. I wasn't then aware of the fact that he saw a psychiatrist and was on medication.

Then, a few years later my father gave in to the futility of his life and died. I was back from Amsterdam and working in London and together my brother and I coped with the sadness of it all and at this time I became increasingly dependent on, and possessive of him as the secure emotional anchor in my life. This was despite the fact that I had met my now husband Olly and had had my first child.

So when very shortly afterwards my brother announced that he had met an American woman he intended to marry and they would live in New York, as I congratulated him the best I could, I felt my world disintegrate. And when he went I felt it as a massive abandonment, suffering from an acute sense of loss and vast insecurity, as he was the person I had been cleaved to through so many years. The person with whom I had gone through the death of two parents.

Illogical and inappropriate I know. But raw feelings often are and they raged in me so that when my brother and his wife visited, or I them, I was a coiled spring of aggressive stress and pain which must have made me a poisonous sister-in-law and made my brother withdraw. Our relationship became a messy rag - all that remained of the once close-knit warming cloth.

He and his wife had their first child and wanted to bring her to visit. I knew that if I could not do something about the savage and destructive feelings eating me up, I risked ruining my relationship with my brother for ever. To be less than warmly welcoming of his new child, and the still tighter union he had with his wife, would be disastrous.

And so it was that a friend who had therapy herself convinced me I needed help.

And on that first session with the mature woman sitting in the chair opposite, I began telling about how my brother and I had grown up close, and how we had both been shattered at the death of our mother and how my brother had then been, effectively, abandoned by all the women close to him. The tears broke and I wept and wept feeling such pain at what my beloved brother must have had to cope with.

By the time I returned for my next session an extraordinary change had taken place. All the anger, the fabricated reasons for dissing my brother which had become my modus operandi, were gone. Replaced by an enormous sense of compassion, love and caring.

When he and his family visited I felt nothing but warmth and pleaure at being a part of their life. With my therapist I talked of this, and heard her careful questions and observations, leading me to see how I might hold on to this new set of feelings.

It was an epiphany, and it was also a time of realising that therapy can offer something I could not possibly have done by myself. And that there were other issues in my life around my relationship and work that were prone to emotions I could not fathom or control, and which I defended myself against.

So I kept going. Quite often I would set out, irritated at having the appointment because really I had nothing to discuss, only to find that all sorts of things that weren't foremost in my mind came up and were usefully aired, so that I would leave feeling lighter and cheerier.

Other times I would have problems I knew I was not dealing with and they would pour out in the shadowy quiet of the consulting room, and my therapist in her discreet, gentle-voiced way would help me see what might lie at the root of the discord, what older issues were being triggered, why I might be so troubled by something that others seemed to cope with. Why I, like so many I now know, feel they are the kid outside a house, nose pressed against the window pane, where a party is going on inside and although many friends are there you have not been invited.

For five years I went twice then once a week until I realised I felt stronger, calmer, more able to live with myself and I discussed this with my therapist who agreed the time had come for me to finish the therapy.

It felt nerve-wracking, but she offered me a lifeline: I could get in touch if I felt the need to return for a session, or two, or more.

When I had gone I realised how much of a mother figure she had become, quietly reassuring that the world had a place for me, as my own mother had been. I missed her but also felt I needed to go it alone.

I tried to analyse what it was about therapy that had wrought the changes I experienced, but could only see it as a kind of psychological sleight of hand, an insightful discernment, and that the fact she was not emotionally involved with me meant she could be as trenchant as she felt necessary without it being about putting friendship at risk and so on. In other words she could bring a clarity of vision, a perspicacity to her questions, which someone more involved could not have done. And in doing this she enabled me to gain a fresh view of the way I operated, and most importantly to make choices about whether I acted one way or another, rather than having my engine run by raw emotion.

A couple of years ago I decided I missed the input she had had on my life, although it was not a crisis state. Rather a wish not to lose the way she helped me to centre my life. And so I wrote to her and she agreed to let me come back on a monthly or even sometimes six weekly basis, and I welcomed this. It is enough to, as it were, top up my toolkit, keep things in order, sharpen the bits that have become a little blunt.

And the last time I went to see her something had shifted: I could only think of positive things to tell her about the way my life is right now.

The value of self-compassion in times of crisis

When siblings get left behind